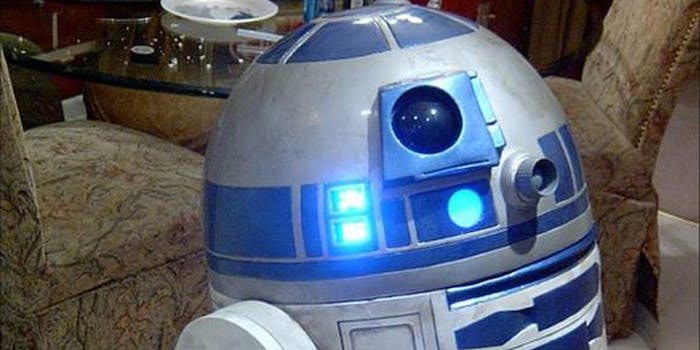 This is the droid the Internet is looking for

"We had a break in over the holiday and my lifesize R2-D2 was stolen. There will be hell to pay."

People of the Internet: This is the droid you’re looking for.

A full-scale replica of R2-D2 was reportedly burgled from a home in Central Texas just before Christmas. Accord to the droid’s owner, Chris F. Bartlett, thieves busted the lock on his garage door and stole the much-loved collectable.

While Bartlett talked to the local police, a friend turned to the Internet’s lost and found and posted a photo of R2-D2 to Reddit. Bartlett also put the word out about the heist on his Twitter account.

We had a break in over the holiday and my lifesize R2-D2 was stolen. There will be hell to pay. #Truth pic.twitter.com/5VpH4I0WS6

@tommyleeedwards they broke into my garage. I came down in the morning and found my garage open and the lock sprung. R2 was gone.

He beeped goodbye every morning and every evening. Now stolen by scum just before Christmas. R2-D2, Godspeed friend. pic.twitter.com/C6Qt2BCyc0

Bartlett has asked anyone who might see R2-D2 pop up on eBay or Craigslist to let him know via his Twitter account, or email him at chris (at) TK409.com. This R2 is a static model, not radio controlled.