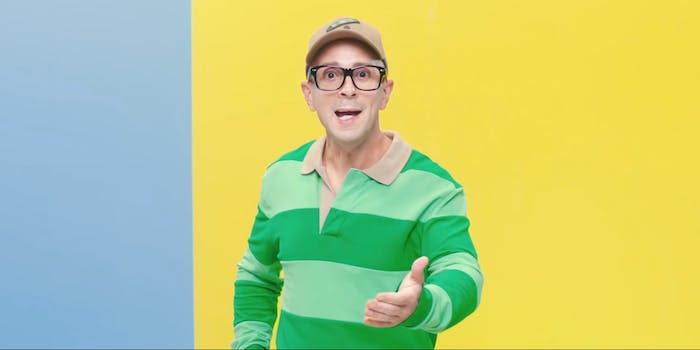 Steve is back, and he's got a message for you.

The original Blue’s Clues—the Nick Jr. preschool program that made us feel like they were part of a mystery-solving team—turns 25 this year, and its original host has a touching message that’s making some of the show’s original viewers rather emotional.

From 1996 until 2002, Steve Burns played Steve, the human who worked alongside the animated blue dog (fittingly named Blue) to solve a number of mysteries in and around his house. He was the show’s trusty guide, someone who told viewers what was on Blue’s mind and always asked everyone at home for help spotting that big clue. When Steve left the show, it was said that he was going off to college while his brother Joe (Donovan Patton) stepped in to take over until the original series ended in 2006.

If you’ve seen the revival Blue’s Clues & You, you’ll know that Steve has a recurring role as a detective; Steve and Joe’s cousin Josh (Josh Dela Cruz) is now the human helping Blue spot clues. But if you haven’t tuned in since the original run, a new video celebrating the show’s 25th anniversary featuring Steve in his iconic green-striped shirt will be a nostalgic gut punch even before he starts speaking.

It’s largely those fans that Steve is addressing when he looks at the camera directly, noting that his going away to college the way he did was “kind of abrupt,” even though it ended up being an incredibly challenging yet rewarding experience.

But he’s far more impressed about what you have been able to accomplish in the years since he went to college.

“Look at all you have done and all you have accomplished in all that time,” Steve said. “And it’s just… it’s just so amazing, right? I mean, we started out with clues and now it’s what? Student loans, and jobs, and families, and some of that has been kind of hard, you know? I know you know.”

Even if Steve hasn’t spoken with us, he’s still grateful for the friendship over the years and the help that we provided him when we were all younger.

“I guess I just wanted to say that after all these years I never forgot you…ever,” he added. “And I’m super glad we’re still friends. Thanks for listening.”

He signs off by telling us that whatever we’re doing, it’s working because we all look great.

For many of the millennials who watched the show as pre-schoolers, a video coming from Blue’s Clues’ original host in which he told them that he was proud of them hit a nerve.

Steve also joined Joe and Josh for a song celebrating the show’s legacy and the fans, telling us that “you can’t spell Blue without you.”