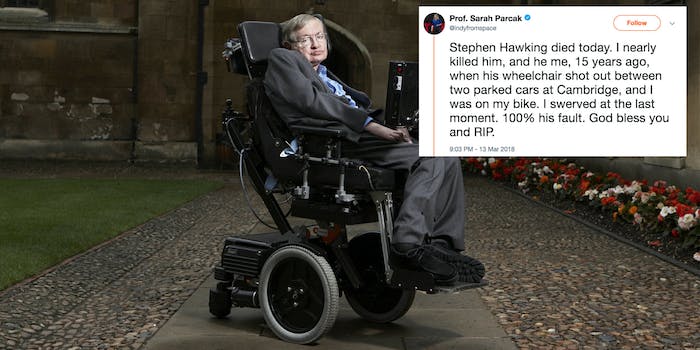 Hawking was apparently a force on the road.

Early on Wednesday, the world found out that famed physicist Stephen Hawking died at the age of 76. Hawking was an inspiration to many people, especially those in science and math fields, and his loss was felt across the internet. On Twitter, many people shared their personal stories of interacting with the physicist—which included several near-misses. Hawking reportedly almost caused several accidents near his home in Cambridge, England.

Sarah Parcak, a professor and Egyptologist, was the first to tweet her story. “I nearly killed him, and he me, 15 years ago, when his wheelchair shot out between two parked cars at Cambridge, and I was on my bike. I swerved at the last moment. 100% his fault. God bless you and RIP,” she wrote.

Stephen Hawking died today. I nearly killed him, and he me, 15 years ago, when his wheelchair shot out between two parked cars at Cambridge, and I was on my bike. I swerved at the last moment. 100% his fault. God bless you and RIP.

She followed up with more detail, adding that she was biking carefully:

Several people replied to Parcak’s tweet with their own stories of nearly crashing into Hawking:

Me too! He must've been having a bad year as I nearly hit him with my car 15 years ago too. I lived opposite him & coming home late one night I screeched to a halt as I came round a corner to find him in the middle of the road with no lights on! #RIPHawking

Yep – I almost got him once reversing my girlfriends car (which I’d not driven before) out of a parking space at the back of Newnham. Lucky I saw him just in time!

This story doesn’t even involve vehicles: one person almost ran into Hawking and had to actually leap over him.

I nearly took him out running around the corner of Downing and St Andrews St… managed to leap over him and avoid the embarassment of killing the greatest mind alive!

Other people on Twitter saw these stories as a fitting tribute to Hawking, who had a great sense of humor.

read the replies to this and see how many people nearly killed him too hahah the man was reckless https://t.co/1V6DmOWLDD

I love that there's a thread of people in Cambridge who nearly killed Steven Hawking: https://t.co/cSQ2XcvTRk

“I almost accidentally killed Stephen Hawking” Twitter is the kind of Twitter you never knew you needed https://t.co/Z3sAneh4z9

This is the thread I've been waiting for. Hawking's cavalier attitude to traffic was legendary, and an inspiration for me. https://t.co/jRzUN36NNM

This thread with multiple accounts from people who almost ran over Stephen Hawking feels like an appropriate tribute to a brilliant man who was human, like the rest of us. Thanks for the lovely loaner, universe. May he expand the next world as well. #Hawking https://t.co/UYdqt7VLl1

Hawking was also known to run over the toes of people he didn’t like with his wheelchair.