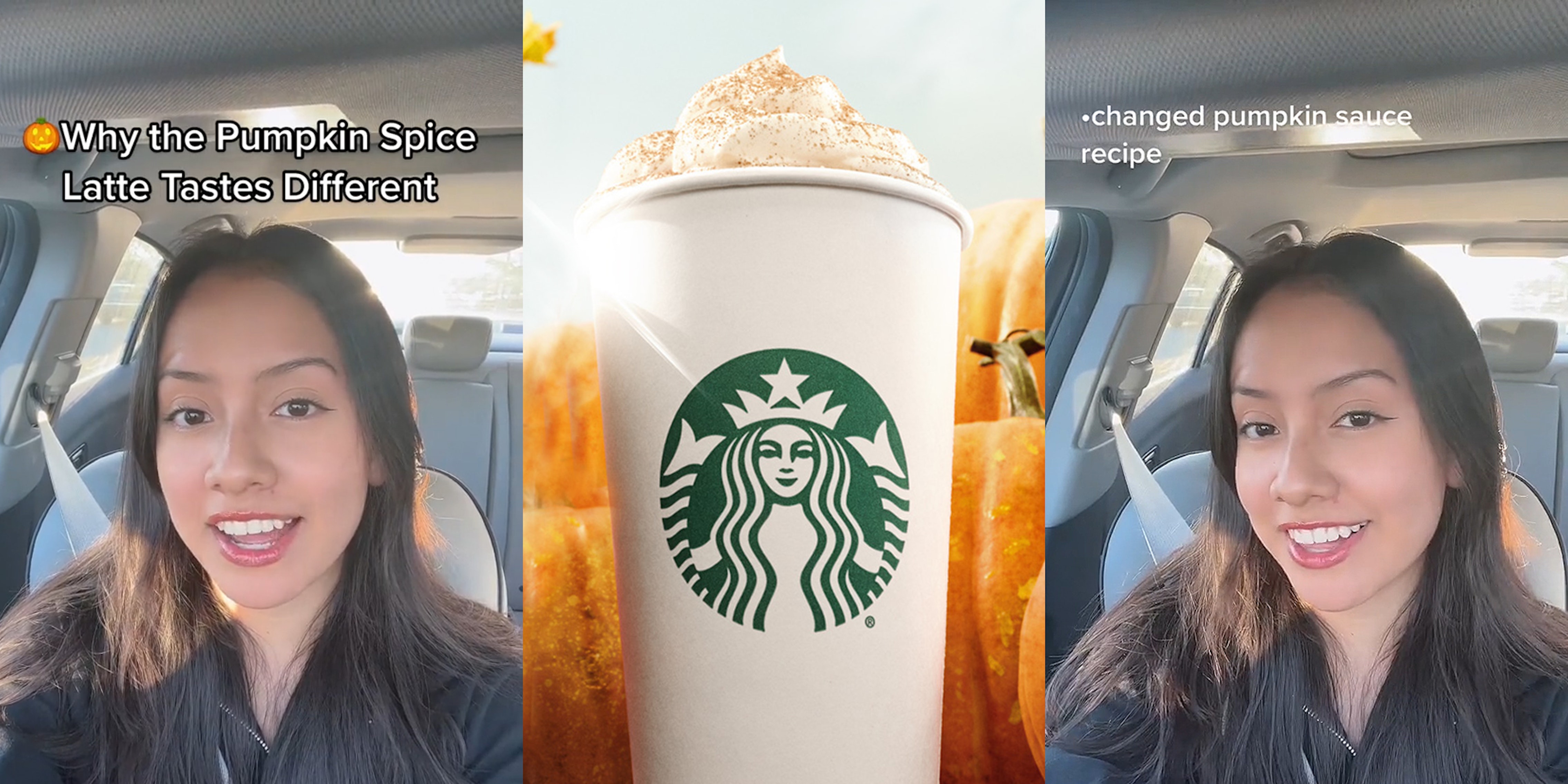 ‘It used to be artificial, which I loved’: Customers say Starbucks’ PSL tastes different, sparking debate

'A lot of stores do it differently evidently.'

Starbucks’ Pumpkin Spice Latte is one of the coffee brand’s most recognizable flavors. It’s the franchise’s most popular seasonal drink, with an estimated 424 million cups sold worldwide. It became associated with North Face vests, headbands, leggings, and a pair of fur-lined moccasin boots as the unofficial “White Girl in Fall” look that wouldn’t be complete without a cup of the stuff in your hand.

While some pumpkin-flavored products poke their heads out onto shelves every autumn that’ll have you questioning the business savvy of whoever concocted them, the Pumpkin Spice Latte is a widely beloved beverage that hundreds of millions of people every single year enjoy. It would be a big deal if the Seattle-based coffee conglomerate ever changed the drink’s recipe.

But that’s exactly what some PSL lovers are saying online. Many folks who were excited to dig into this year’s crop of the fall-themed beverage were left disappointed, like TikToker @maariamarmora. Maria went viral after pointing out how the “weird” taste this year lacks the drink’s trademark autumn notes.

Other users on the platform were quick to confirm that yes, they too felt like something was off with the PSL flavor, so Maria decided to dig into the topic a bit further. In a follow-up TikTok, Maria claims that many folks’ PSL suspicions were confirmed: the recipe for the latte was changed.

“If you didn’t know, I’m a Starbucks barista, and they changed the Pumpkin Spice Latte,” she says in the video. “I’m currently not working at Starbucks right now, but I’ll try to help you out. So the Pumpkin Spice is different this year and that’s because they added actual pumpkin ingredient, or whatever.”

As it turns out, a lot of folks seemed to enjoy the previous flavor over the supposed new and improved formula, which is made from actual pumpkins as opposed to the artificial flavoring created to dupe the orange squash.

“It used to be artificial, which I loved,” Maria continues. “Also, they changed the pumps so that apparently it’s not the same full pumps, so you’re getting technically less. And since they changed the recipe, it’s gonna taste different regardless.”

Maria updated her followers with some experiments to help fellow PSL drinkers find a drink from the retailer that’ll help satisfy the same need longtime stans of the “artificial” recipe are missing.

She went on to surmise that the weaker pumpkin flavor and smaller pump volumes would necessitate that customers try and add as much pumpkin to the beverage as possible in other forms. Asking for a ton of syrup may not give the best flavor profile to a drink for some, so Maria tried a new drink order: “an iced caramel macchiato with pumpkin sauce instead of vanilla, pumpkin cream cold foam [with] an extra pump in the foam.”

Though The Daily Dot received email confirmation from Starbucks corporate that the recipe has not changed, Maria stands by the coffee’s different taste, and there are tons of other people in the comments section of the follow-up clip who agree that something is amiss with the PSL.

Some contested that the actual recipe for the syrup hasn’t been altered, but that Starbucks is now using less of it. Others think that the latte tastes better this year than it did previously. One user mentioned that they noticed a marked difference in the beverage before they even took a sip as they thought the color of the drink was off.

“It’s so much better this year.”

“It’s not full pumps. it’s half pumps now so last years 4 pumps is 2 this year.”

“So interesting! I liked it so much more this year and wondered why!”

To make matters more confusing, a number of active baristas said that they indeed are using the same pumps that Starbucks has been using for years and that even the amount of syrup hasn’t changed.

“We use the same exact pumps as last year??? Nothing has changed with the amount we put.”

However, a bold accusation came up by one user in the comments section. The user claimed that Starbucks corporate has indeed been making the original Pumpkin Spice Latte syrup available to stores, but that some stores are using different pumpkin flavoring for whatever reason.

“The pumps are the same it’s the stores NOT putting in the right pumps.”

“A lot of stores do it differently evidently.”

We do know that Starbucks was hit with supply chain issues that affected operations during the pandemic and into 2022. Some items, like cups, were in low supply, not to mention there were murmurs of a national PSL shortage in the Fall of 2021.

It does seem likely that there’s a dearth of the stuff available. On both Amazon and other online retailers, it appears that the “original” recipe PSL sauce is sold out.

The Daily Dot reached out to Starbucks via email and to Maria via Instagram direct message.