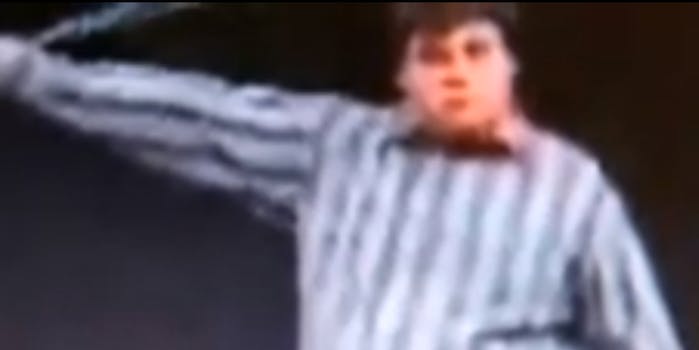 Star Wars Kid strikes back! And it’s against a worthy enemy: online bullies.

It’s been 10 years since anyone’s heard from Ghyslain Raza, one of the earliest viral video stars. His 2003 home movie of himself pretending to fight with a lightsaber, like Jedi knights, has been viewed by nearly 1 billion people.

The video, made as a Star Wars parody for his school’s AV club, resulted in unwanted and long-lasting Internet fame for Raza and in increased bullying both online and off-. It was one of the first and most high-profile instances of cyberbullying and the viral potential of the Internet, and it occurred all pre-Youtube.

Raza was even parodied on Arrested Development in a recurring bit where nerdy George Michael Bluth (Michael Cera) is caught on a similar, embarrassing video tape.

The now 25-year-old Canadian gave his first interview, on newsstands today, in a decade to award-winning French-Canadian journalist Jonathan Trudel in L’actualité magazine, speaking up in the hopes of squashing the epidemic of suicides and cyberbullying among teenagers. The interview is also available in English in the magazine MacLean’s.

The fallout of the video, which classmates posted online without his permission, required Raza to change schools. Real-life bullies and online anonymous commenters told him to kill himself.

It was “a very dark period,” he said. “No matter how hard I tried to ignore people telling me to commit suicide, I couldn’t help but feel worthless, like my life wasn’t worth living.”

Now a law school graduate at McGill University, Raza hopes school authorities will take cases like his more seriously, especially in light of the rash of teen suicides related to cyberbullying. In 2006, 13-year-old Megan Meier hung herself after being bullied on Myspace. In 2010, Rutgers freshman Tyler Clemente jumped from a bridge after his roommate filmed him having sex with a man and outed him on Twitter. Six teens have taken their own lives after being bullied on Ask.fm. The cases, at this point, are endless.

Raza said he hopes talking about his experience will help others to deal with cyberbullying, and urged other young victims to “overcome (their) shame” and seek help.

“You’ll survive. You’ll get through it,” he said. “And you’re not alone. You are surrounded by people who love you.”

Great work, Raza! Way to use the Force for good.