I have a feeling The Force Awakens is going to be the biggest movie opening in human history. Not necessarily by profit, because I’m sure someday Avatar 4 or whatever will sweep through and make several trillion dollars in the year 2065, but absolutely in terms of cultural relevance. The thing has Luke Skywalker in it. In 2015. Luke Skywalker is in a movie in 2015. It’s the ultimate break-glass-in-case-of-emergency moment in cinema, and it’s finally happening 32 years later.

There’s been a tremendous amount of goodwill around The Force Awakens, which is perhaps surprising given the full-on revolt that we saw when Revenge of the Sith showed up in 2005. But there’s good reason for it. J.J. Abrams is, by and large, a man we can trust, and the critics seemed to enjoy it. And, again, the fucking thing has Luke Skywalker in it. There are only so many things our cynicism is capable of infecting.

But here’s where Disney’s marketing team has gone too far. Below, enjoy a photo of Star Wars branded apples. Like, from the grocery store.

Hmmm which type of apples should I get? Oh good they have the #StarWars ones. pic.twitter.com/UkGTvGS7Ns

Sarah gave me grapes and said she chose the one with yoda on them and proceeded to say "may the grapes be with you" pic.twitter.com/pRtiLurkNm

From what I can tell, these fruits have nothing to do with Star Wars outside of Darth Vader looking sinister on the plastic wrapping. That’s a shame, actually, because if you told me eating these would make me force-sensitive, I’d be all over them in a second.

Here’s some other stuff we’ve seen both within and outside the U.S. Star Wars cold cuts:

they now have star wars sausage and sandwich meats, so you can taste the force! pic.twitter.com/qsX21MFwTA

#StarWars marketing is even more insane outside America. Here, have some BB-8 corn and Darth Vader foie gras cream pic.twitter.com/YWQntoVdyq

Star Wars chicken nuggets like are you serious man. 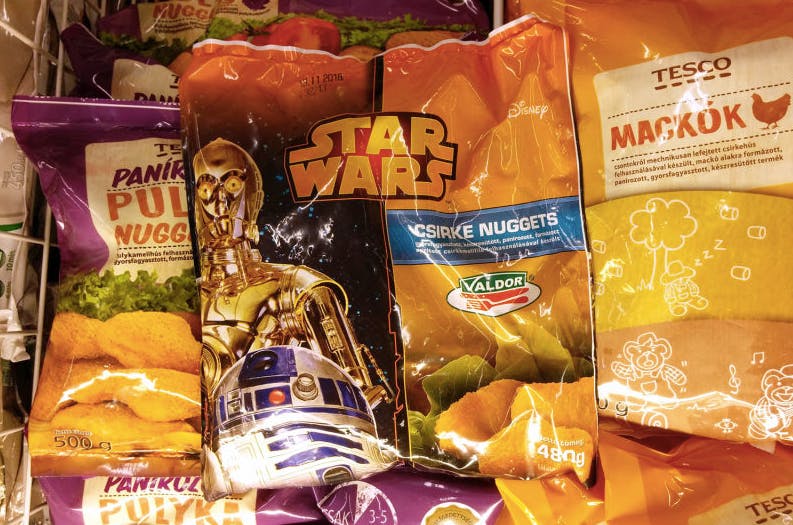 Let’s chill out a bit, OK? Let’s get back to merchandising roots. We’re talking Star Wars Battleship, and Star Wars pez dispensers. Look, I’m going to see the movie. Everyone is. You don’t need to convince me with an apple.