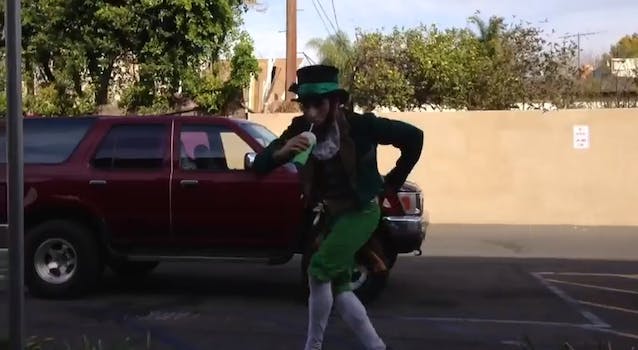 The 10 most WTF St. Patrick’s Day videos on YouTube

St. Patrick drove the snakes out of Ireland. We have Lego proof.

St. Patrick drove the snakes out of Ireland. We have Lego proof.

A video that tells the story of Ireland’s patron saint using the popular toy brick is just one of many WTF videos centered around St. Patrick’s Day. Songs, commercials, and poorly produced talk shows are just some of the ways that YouTube videographers and stars mark the annual March 17 holiday.

As an aside, we all know that St. Patrick’s Day falls at a time of year when the long winter finally begins to give way to spring. Cabin fever caused by the lengthy winter months being released is rather evident in many of the following videos. When folks have not experienced the sun’s warmth since possibly Halloween, it does very strange things to them that, fortunately for us, are captured on video.

Kids, adults, and animated leprechaun mascots alike cannot resist the flavorful marshmallow taste of Lucky Charms cereal. Our first video starts out as an innocent, if boring, declaration of love for the breakfast food but quickly delves into something far more terrifying.

Bubb Rubb and the Mobile, Alabama, leprechaun sightings aren’t the only video memes related to the famed St. Patrick’s Day mascot. In this NSFW hip-hop-inspired video, a crude leprechaun demanding that people bring him gold, lest he bless them with golden showers, is represented by even cruder illustrations.

What is it with amateur animators using poor leprechauns to showcase their sophomoric animation and illustration skills? In “leprechaun,” which opens with a “mature audiences” only rating, a leprechaun braves a barrage of falling clovers to snatch a pot of gold and run off with it. Don’t let the warning mislead you; this video is more SFW than small talk about children and sports around a water cooler.

A leprechaun-resembling garden gnome gets quite the show from a topless female dancer. We, the audience, do not. Enough said.

Nothing invokes the spirit of the Irish quite like seventeen seconds of random Irish-themed images (like a Care Bear tattoo) interspersed with, among other pieces of audio, Gilbert Gottfried screaming “I can’t take it anymore!”

The Leprechaun series of films aren’t the only instance of horror and leprechauns being mixed together—but they should have been. In this staged interview on a horror-themed talk show, the Slash-resembling host, “Svengoolie,” trades terrible puns back and forth with a leprechaun puppet, who repeatedly whacks him over the head with a cane.

McDonalds’ annual offering of the Shamrock Shake beverage certainly has its fanbase, who are eager to welcome it back to its rightful home under the Golden Arches each year. Sure, the drink looks like the ooze that turned four baby turtles into their Teenage Mutant Ninja counterparts, but that doesn’t dissuade frequent—or even casual—McDonalds consumers from gulping down as much of the liquid as possible before April hits. While their excitement is understandable, most of them probably do not express it by dressing as a leprechaun—who looks far more like a green Abe Lincoln than a pint-sized creature of Irish folklore—and dancing around a parking lot.

The tale of St. Patrick ridding Ireland of snakes—and being canonized for doing so—is one that is rather well-known. Unfortunately, up until 2010, the tale was told through boring means like words, drawings, etc. Thankfully, St. Patrick’s Irish eyes can smile genuinely now that his legacy has been told through Lego bricks.

In recent decades, local TV news has suffered several blows to its once-unique platform of true journalism: corporate influence, scare tactics, entire news teams made up of wannabe/failed supermodels, etc. The St. Patrick’s Day promo seen below, made for a small TV station in New Mexico, itself doesn’t exactly do wonders for the medium’s case. Nevertheless, it is entertaining in that special way that only disco-dancing leprechauns can be entertaining.