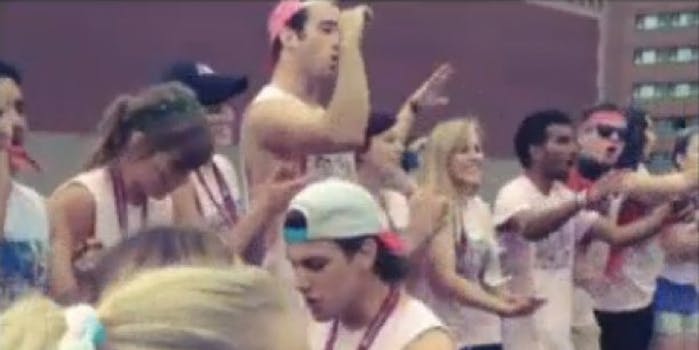 Fraternity members and university students participating in rape chants is, unfortunately, nothing new. And “frosh week” leaders at Saint Mary’s University are just the most recent example. This week, the Halifax, Nova Scotia school came under fire after a 15-second video posted to Instagram showed freshman orientation leaders cheering about underage sex with girls without consent—also known as rape.

In a chant that’s apparently been used at “frosh week,” where incoming students are introduced to the university, the leaders yelled to the group, “Y is for your sister, O is for oh so tight, U is for underage, N is for no consent, G is for grab that ass … St. Mary’s boys, we like them young.”

According to CBC News, the school’s student body president, Jared Perry called the chant an “oversight” and said it will not be used in the future. The university’s officials apparently had no knowledge of the chant until the Instagram video was posted. In the video, the chant is led by the boys, but the girls clap right along with it. A comment on the video reads, “You might want to take this down. It’s on the news.”

In the wake of the viral video, all 80 of the SMU frosh week leaders and the entire student union executive board have been ordered to take sensitivity training.