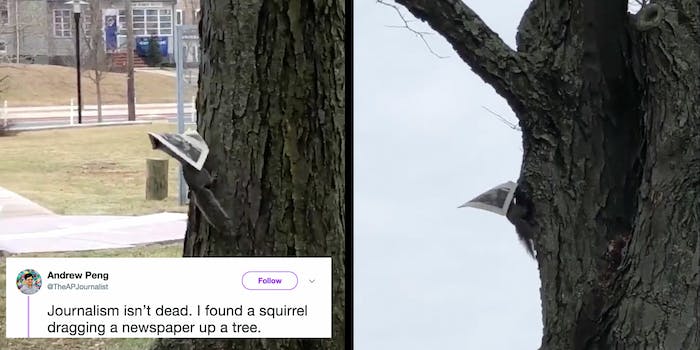 Despite what a lot of people think, journalism is alive and well—and a cute little squirrel carrying a newspaper up a tree proves it.

Journalism isn’t dead. I found a squirrel dragging a newspaper up a tree. pic.twitter.com/vGOOKd0B4D

Twitter didn’t miss a beat to ask Peng a few follow-up questions about newspaper squirrel. Did he pay for his paper? Or just hack through a paywall? Some cracked jokes while they were at it.

Ya, but did it pay for the paper?

What's black and white and dragged all over?

Hate to disappoint you lovers of serious journalism, but I happen to know this squirrel personally; he is an inveterate gambler & only reads the Daily Racing Form…

Write about your readers. It's journalism 101. pic.twitter.com/MefMJDrpRJ

If he drags his morning coffee up there, too — I'll be seriously impressed.

Just try doing that with an iPad.

Peng reminded the jokesters that if they enjoyed his quality content on Twitter, they should consider supporting local journalism as well.

It’s no surprise that newspaper squirrel was enticed by the newspaper—after all, the news these days is pretty nuts.