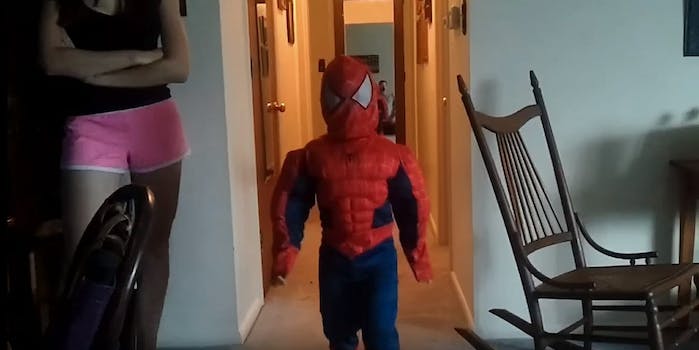 Well, that's got to be embarrassing.

One would-be Spider-Man has all the right qualifications for the job—agile, a confident strut, and prepared to protect his family—until he sneezes.

“Ewwww,” the young Spider-Man says, trying to take off his mask while making sure the results of the sneeze don’t get all over his face.

We can only imagine how bad the outcome was (the sneeze basically went back into the kid’s face), but what about his family? They’re all laughing at him as he tries to make his big debut as Spider-Man, and now he may never want to be a superhero again. He’s probably afraid that the next time he sneezes he’ll always remember this exact moment.

Well, at least he has his own theme song now:

Spider-Man, Spider-Man
Does whatever a Spider-Man does
Slings a web out of his nose
Holy crap look at him go
Look out
Here comes the Spider-Man