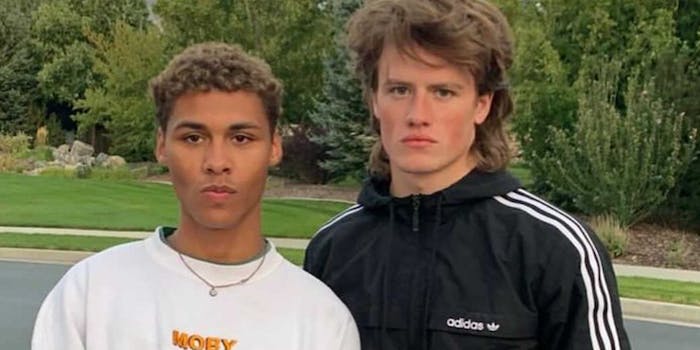 Meet Speedy & the G, the TikTok comedy besties taking over your For You page

'People can just get behind a duo.'

“Is it just me or is anybody else just strictly on Cory and Damen TikTok?” one user, Ben, muses. “They’ve taken over my entire For You page.”

Indeed, Cory Winn and Damen Mummert, two 20-year-old childhood besties from Utah, have recently taken over TikTok. Their signature handshake, sit-down comedy bits, and perhaps most importantly, their captivating friendship has attracted 1 million followers on their joint account. They do seem to be everywhere lately, but they didn’t come from nowhere.

Winn and Mummert—collectively known as Speedy & the G, an homage to the Looney Tunes character Speedy Gonzales—have been posting together for nearly two years. They are easily recognizable because of the distinct style of their TikToks. The look is simple, with the two of them sitting in old dining chairs in front of a white wall. They start every clip by shaking each other’s hands. The videos cut back and forth between the two men as they converse and crack jokes.

Their earlier content looks slightly different. The two got their start on YouTube in August 2019 doing a longer, prototypical version of what they’re known for now. Their first video, “Spit Takes, ASMR, & Alzheimer’s” and labeled as the first episode of the Speedy & The G Podcast, is around 20 minutes and has around 3,000 views. It features the two of them sitting at a long table, cracking jokes, going on tangents, and seeing where the conversation takes them.

Today, their TikToks are tighter, both physically (the two of them sit closer together) and temporally (their jokes and conversations typically last less than a minute). They also average hundreds of thousands of views.

Mummert tells us that the duo always thought they’d make it on YouTube, so it was surprising when they took TikTok by storm.

“I didn’t think it’d happen this quickly, on our secondary format where we’re just like, ‘Maybe this will help us out in our long run of YouTube and stuff,’” Mummert says. “It was definitely weird that it’s grown so much so quickly.”

They pivoted in March, just to try something new; because of how their content is styled, people often call them a podcast (to be fair, in their early work they referred to themselves as a podcast), but they strongly reject the label.

They really just wanted an outlet for their funny conversations, and at the start, it seemed like an ideal format. But after a few weeks of trying the pseudo-podcast thing, Mummert says they moved on to “cooler” stuff: Vlogs, pranks, and stunts—the typical formats of success on YouTube. One stunt got them their first viral hit… and a ban from the Utah Jazz’s Vivint Arena.

Their first viral YouTube video featured the two of them sneaking into a Utah Jazz game by impersonating ice delivery men. They got all the way to the locker room before they were caught. A clip of the video was also uploaded to TikTok, going viral on that platform as well, but all footage of the incident has since been taken down.

“​​It’s like every group of friends who think they’re funny does,” Winn explains of their start. “They’re like, ‘Oh dude, we could just sit there and talk and it’d be hilarious content, our everyday conversations are very watchable.’ We’re one of the few people that that has happened to work out for.”

Mummert credits Winn’s editing chops with their TikTok account’s success. The duo says their videos are never scripted, which means a filming session can go for 30 minutes to an hour in silence before “something good” pops up. The trick to short-form comedy like this is not to force anything, they say.

“As soon as you know something’s good, we know each other well enough where we can roll off each other and the topic will be good,” Winn continues. “We’ve been friends for eight years, so we know too much about each other to not be able to talk about just about anything, it just has to be the right topic.”

When asked about their influences, Mummert rattles off a list of iconic best friend pairings in pop culture, mostly fictional. The Men in Black. Mario and Luigi. Finn and Jake from Adventure Time. Mummert thinks the appeal of duos lies in the friendship between two people, rather than straight comedy.

“Whether you think we’re funny or not… people can see how genuine our friendship is and how none of it seems scripted,” Winn adds. “It feels like a conversation you would actually have. People can just get behind a duo.”

Comedy duos have had a resurgence in mainstream comedy over the past few years. In 2015, writer Adam Sternbergh wrote in Vulture, “More than a renaissance of comedy duos, we’re seeing the rise of the comedy besties.” Where traditional double acts often relied on antagonism, Sternbergh said today’s pairings are “built on comedic cohesion.” Unlike the days of Abbott and Costello, there’s a bigger emphasis on friendship because it feels like we’re joining in on the fun.

And on the internet, collaboration is an essential tool for growing an audience. It allows a group of people to introduce their viewers to each other, fostering new individual audiences and joint ones. YouTube even has a dedicated lesson on collabing under its guide for getting discovered as a creator, with an emphasis on choosing “compatible” partners and being “authentic.”

Chemistry, then, is crucial to a good, successful collaboration. And often, it can’t be faked, which gives longtime friends like Mummert and Winn an advantage. According to Winn, it also makes the job more interesting.

“It’s way more fun to make YouTube videos with your best friend than it is just alone,” he shares. Mummert says having a friend by his side has also made navigating the newfound attention—and disingenuous people coming out of the woodwork—easier.

Working with friends also has its pitfalls, however. “The only thing that’s bad about it is, the line between hanging out as genuine friends and creating content is so blurred, but it’s worth it, I guess,” Winn adds.

Capitalizing off one’s friendship, while taxing, can indeed catapult a pair to a higher level of success. In the past few years, we’ve seen longtime dual collaborators build whole brands together. Early U.K. YouTubers Caspar Lee and Joe Sugg frequently collaborated on vlogs in the 2010s, becoming roommates and eventually co-founding digital talent firm Margravine Management. Cody Ko and Noel Miller, off the success of their extremely popular reaction series “That’s Cringe,” started creating music and a podcast under the moniker Tiny Meat Gang (TMG). TMG is now one of the top Patreons on the site, and Ko said in a recent video that the two are creating a podcast network. Their successes are not only predicated on their individual ideas, but on the strong creative partnerships they have.

Speedy & the G have taken a page out of TMG’s book—literally, in their first video, Mummert retooled a joke Noel Miller made in an old “That’s Cringe” episode—but also in terms of how they’d want to structure their work.

“They’re everything I think we’d hope to be,” Winn says. “They’re so good on their own, but together they’re so freakin’ iconic.”

As the past two years have rolled on, they’ve found their own stride on TikTok, creating something unique to them that has viewers wanting more.

“I’m sure we both ripped plenty of comedy…” Winn quips. “I always say there’s no such thing as an original idea, and everything does come around full circle. It’s just who’s doing it best at that very time, on a different platform.”

Mummert mentions that the Speedy & the G account has more followers than TMG on TikTok, a fact that blew his mind.

“Flexing on our idols,” Winn jokes.

“They can literally make a tweet, and they’ll pass us up tomorrow,” Winn responds.

“For me, it’s like these guys are what we’ve always kind of wanted to be and even for that tiny second we’re ahead of them in the same type of format on the platform, that was crazy to me,” Mummert says. “Kinda just says a lot, like there’s a future in this for us.”

As for the future, Mummert and Winn are weighing their options. Winn mentions that there are a lot of different paths that creators take after a “sudden exposure”—they’ve grown 10-fold since April.

A year ago, they didn’t even think they could make money from TikTok (to be clear, they say they hardly draw from the creator fund), and now they’re scoping out new opportunities as their star rises. In terms of content, on the suggestion of fellow TikToker Vinnie Hacker, the two might start a Twitch stream. The ultimate dream for them is to employ their friends, to “make sure all the homies are good,” as Winn put it.

“The future holds the most exciting opportunity,” Winn says. “I don’t know what that is, but we’re gonna go with that.”