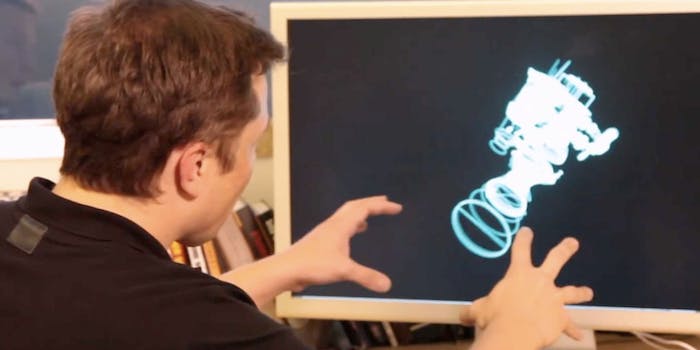 It's a lot more hands-on.

Here’s a nifty glance at how complex engineering may be done in the future: SpaceX, an 11-year-old company out to “revolutionize space technology, with the ultimate goal of enabling people to live on other planets,” yesterday posted a YouTube video demonstrating their attempt to make rocket design less 2-D and more intuitive.

Noting that we traditionally use keyboards and mice to “tell” the computer how to modify, say, a wireframe model, SpaceX founder Elon Musk explains his company’s ambition to cut out the middleman, so to speak, and interact with the model more directly.

Splicing the Leap Motion device—which can read hand motions with infrared light—together with other computer-aided design tools, Musk is able to virtually manipulate the object onscreen. Together with 3-D printing, this could prove an invaluable tool, one that greatly increases the efficiency of SpaceX’s work.

Naturally, rocket science often calls for tasks more complex than simply spinning or realigning a piece of hardware—Musk admits that the applications of this technology are limited but is optimistic that as we refine it, it will become a go-to interface. The video is titled “The Future of Design,” after all.

SpaceX has even developed alternative formats to explore which might be most effective: you can use the same 3-D projection technique employed by blockbuster films, a “freestanding glass projection,” (which looks like something out of Minority Report or Iron Man), or Oculus Rift headgear, which creates a fully immersive virtual reality.

So, will this stuff get us to Mars any sooner? Personally, I don’t care; it’s just neat to look at.