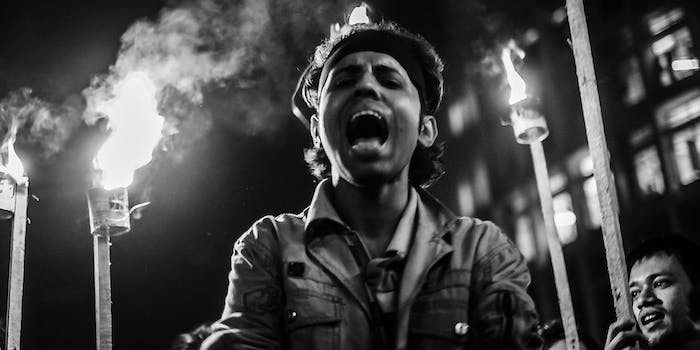 The revolution will not be shared

If you want revolution, stop sharing and start caring.

I could watch a YouTube clip of a city devastated in a nuclear blast and I don’t think it would affect me at all.

I consume disasters and revolution with a cool detachment—it’s all part of an information feed that I cater to my whims. I can’t smell the smoke from my computer, or feel the adrenaline experienced by activists locked down to a fracking well from the livestream feed. Modernity will convince us that this is what it means to be “connected” at all times, that we never have to look each other in the eye.

I got into the Internet mainly as a way to connect with like-minded people and spread my music. In the ’90s, I came up on old-school message boards and old-school newsgroups; I loved sharing information, articles, essays, videos and being part of a vibrant community built around similar values. I always wanted to break down the walls and level the playing field between artist and listener. 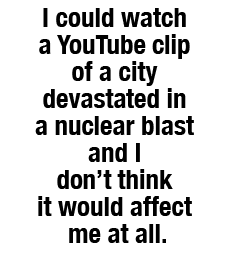 Fast forward 12 or so years and things have taken a strange, ugly turn. These days an “artist’s brand” consists not only of their music and views but also consists of them livetweeting their trips to the veterinary clinic, their half-baked opinions on everything and anything. Back in 2009, I decided to stop posting vegan recipes and pictures of my dogs because I felt that with all my desires of “infiltrating the spectacle,” I was feeding it. My attempts to “prove I’m a human being” might have fooled a spambot image-captcha-security form, but instead of making me more “real,” it was feeding into the “cult of celebrity” that social media seems to be built for.

Occupy’s greatest accomplishments, in my opinion, was breaking down the walls of alienation. For the first time in many peoples’ lives, public spaces were reclaimed for a democratic process that communicated with people all over the world. In this era of extreme isolation and individualism, the idea of reclaiming common space for a project unrelated to commerce or the state is the first true sense of “community” that most people ever experienced. That was why the camps had to go: People were talking, getting organized… becoming un-alienated from each other. Homeland Security isn’t stupid; it knows that if we remove all the things that marginalize us, the only thing standing between the people and their dreams is a couple buildings and a few thousand cops. 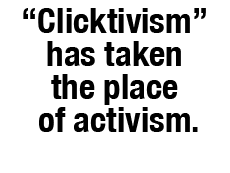 During the Occupy uprisings in the U.S., I made it a point to seek out the folks who seemed to have the best analysis from the ground, and for 2011 my Twitter feed became a news feed that directly related what was going on in each city, from people who were on the front lines.  Now those same people have mostly resigned themselves to sharing everything that happens everywhere and merely commenting on it. They don’t seem to be organizing in the streets at all.

Somehow, for many, “clicktivism” has taken the place of “activism.” Sharing a fundraiser for bail or denouncing the cops from social media is not a protest—it’s just more white noise to feed Internet monster.

Recent popular culture would like us to believe that uprisings that have occurred from Egypt to Kiev are made possible by technology. Although technology has played a role in all this, we rely on it to mediate our relations at our own peril. Those revolutions didn’t happen because someone shared the right Facebook post. Those revolutions happened because people were out in the streets organizing.

If you want revolution, stop sharing and start caring.

Sole is a rapper, activist, and cofounder of the influential record label, Anticon. He’s currently crowdfunding his new album with DJ Pain 1, Death Drive, on Indiegogo. The duo’s debut single, “Old Gods Ain’t Dead,” can be viewed on YouTube.