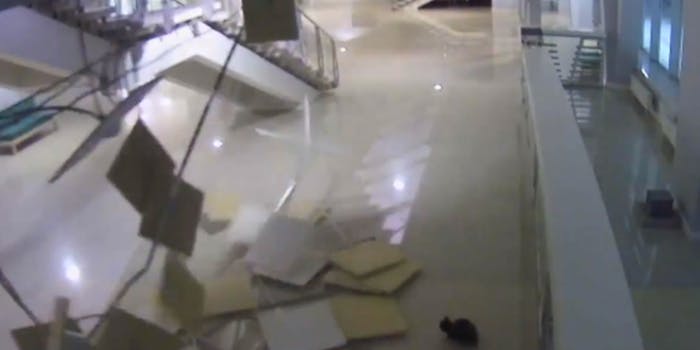 The black cat in question walked away from the scene unphased, like cats do.

In a video posted to YouTube on Sunday, a very literal cat burglar can be seen crashing through the ceiling of the Adler Arena Skating Center, an 8,000-seat venue where the long-track speedskating events take place. The venue actually opened in 2012, and hosted speedspakting events before Sochi. The security camera footage is from October 2013, just months before the Winter Olympics began, but who knows if the ceiling was properly repaired.

The black cat in question walked away from the scene unphased, like cats do.

Reminds us a bit of this video:

Speaking of nine lives, the Winter Olympics seem like they’ve been going on forever, don’t they? Well, they end Feb. 23, but we don’t know if Sochi’s problems will. There still time for more cats to crash through ceilings.