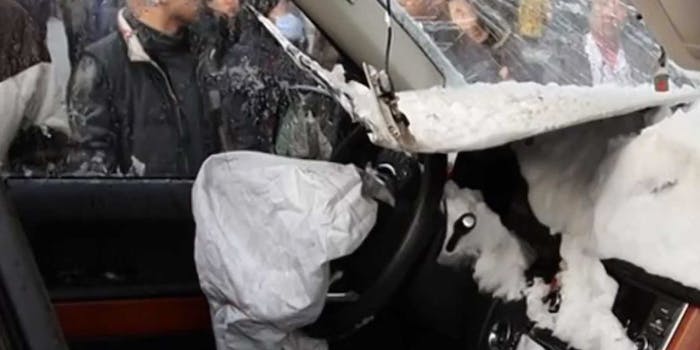 The city of Harbin has been nicknamed the “Ice City” for its long, punishing, sub-zero winters, and with good reason.

Driving on slippery roads is perilous enough, but when giant sheets of ice and snow are sliding off buildings and slamming into the street at odd intervals—as in the startling YouTube video below—motorists should probably just admit defeat, rather than risk a freak accident.

The city of Harbin, China’s 10th-largest and capital of the northeastern Heilongjiang province, is no stranger to frigid extremes. It’s been nicknamed the “Ice City” for its long, punishing, sub-zero winters, and it holds an annual Ice and Snow Sculpture Festival. All the same, few could have been prepared for the region’s worst blizzard in 50 years, a storm that claimed four lives.

Even after the nasty weather had abated, there remained the potential for disaster, as the occupants of this Range Rover found out while rolling merrily down Zhongyang Avenue. So much for the sturdy SUV: the hunk of snow plummets like an iceberg cleaving from a glacier, triggers the vehicle’s airbag and even caves the roof in, blanketing onlookers in a thick white fog.

It doesn’t appear, from the “after” photos, that anyone was too badly injured—a close call, if nothing else, given the state of the crumpled, snow-filled car.

Also, there was probably a municipal employee annoyed to hear that he’d have to plow that road again.