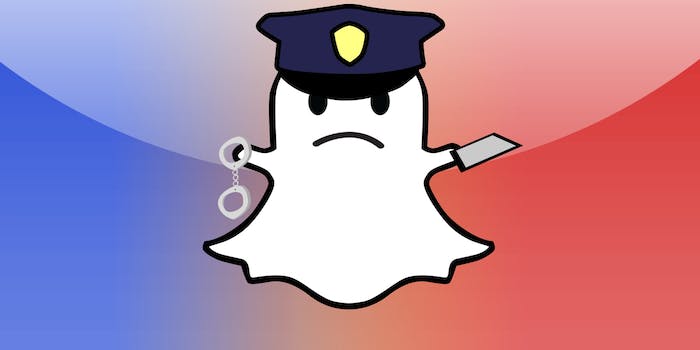 10 Canadian teens have been charged with trading 'deleted' Snapchat nudes of their classmates.

Snapchat has had its fair share of trouble since it claimed to be a drama-free sexting app that deleted photos immediately upon the recipient opening them. Users have figured out any number of ways to save the temporary photos, and now doing so has led to criminal charges.

This morning, Montreal’s CTV News reported 10 teenage boys in Laval, a nearby suburb, were arrested on a variety of child pornography charges after photos of underage girls in sexual poses and in sexual situations, some sent via Snapchat, were uncovered on their laptops, cell phones, and iPads.

Most of the girls in the photos, police say, believed the provocative pictures would be immediately deleted by the app. Seven girls have been identified as the ones the boys allegedly screencapped and saved photos of, passing them around the web. Officers said the photos had been distributed to at least two other schools, and a staff member at the Laval school saw three of the boys looking an inappropriate photo of another high schooler on their phones.

One of the accused boys was sent to the principal’s office, where the rest of the photos and the other teens’ involvement were made clear. The boys, ages 13 to 15, are expected to appear in court to face charges of production, possession, and distribution of child pornography.

Snapchat did not respond to a request for comment.