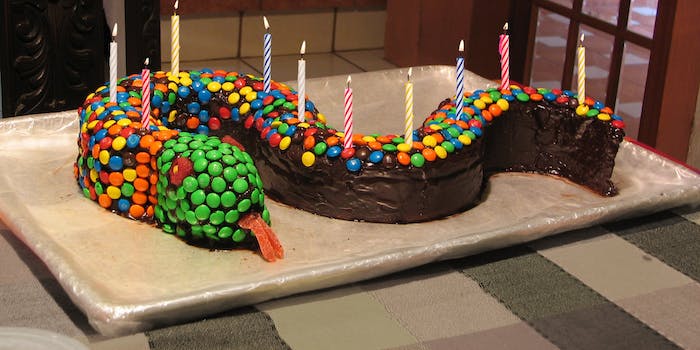 It’s the 10th anniversary of ‘Snakes on a Plane,’ the first movie to become a meme

Where were you when the snakes were on a plane?

The year 2006 seems so far off now, doesn’t it? Barack Obama was two years away from becoming president. Myspace had been sold for $580 million just the year before—and Twitter was launched that July. Pluto was demoted to “dwarf planet,” much to the chagrin of amateur astronomers.

And, toward the end of summer, we got a blockbuster that was supposed to rewrite all the rules: Snakes on a Plane, starring Samuel L. Jackson.

Well before the B-movie hit theaters, it had already made Hollywood history as the first film to become a full-fledged meme. (The Room, though released in 2003, was still developing its cult status on the midnight circuit and remained a long way off from true memedom.) What would’ve been a minor action-thriller about a gangster’s convoluted scheme to murder a trial witness before he can testify generated significant internet buzz in the year before its release thanks to its absurd premise and who-gives-a-shit title, particularly when it was revealed that Jackson was attached to star.

Jackson further fueled the hype after news spread that New Line Cinema had changed the film’s title to Pacific Air Flight 121, much to bloggers’ disappointment. In an interview, Jackson was emphatic about sticking to Snakes on a Plane, the working title that had made the project go viral in the first place. “We’re totally changing that back,” he told the Canadian magazine Maclean’s. “That’s the only reason I took the job: I read the title.”

New Line did fans and Jackson one better. Not only did it switch the title back, the studio shelled out for five days of reshoots to make Snakes a suitably violent R-rated flick instead of the tamer PG-13 romp it had planned.

Most famously, however, the feverish anticipation of foul language from Jackson’s character led a crucial line of dialogue to be added to the script. As traditional media and movie critics scrambled to describe the unprecedented viral phenomenon unfolding before them, we got articles that seemed befuddled by the influence of nascent social media. Here’s a clip from a CBS piece with the headline “‘Snakes’ Charms Cyberspace”:

One line in particular is said to have been added to appease the movie’s youthful online fans. One “Snakes” aficionado, Chris Rohan of Bethesda, Md., created an well-received R-rated audio trailer that uses a Jackson sound-alike shouting, “I want these motherf***ing snakes off the motherf***ing plane!”

While the movie’s director, David Ellis, has been hesitant to directly attribute that line to bloggers, there’s no denying it now appears in the movie.

It’s not a verbatim quote from Rohan’s GraphicAudio trailer, recorded with Nathanial Perry, but the finished product was close enough:

This catchphrase was ubiquitous in the months leading up to Snakes’ cinematic debut, a universal expression of frustration about one’s circumstances and emblem of an audience’s power to shape art. In a decade that has seen geek fanservice as a given—from the Marvel and DC film franchises to Sherlock and Star Trek reboots—it’s easy to forget that it was people eager to see Sam Jackson swear at a bunch of serpents who set the stage. We may not know craft, but we know what we like—and we want it.

Which is why it was all the more perplexing that Snakes crash-landed at the box office. It pulled $62 million—about twice its budget, which would have been respectable had it not been seen as a game-changing behemoth. I can say, for my part, that I saw it in a sold-out, raucous New York theater after smoking way too much purple kush (and enjoyed it tremendously).

So why didn’t anyone else get the memo? Perhaps the potency of viral marketing had been overestimated from the start, as one Urban Dictionary definition claims. Hype begets hype, not necessarily ticket sales. And does this not accurately predict a “buzzed-about” fiasco like Suicide Squad? 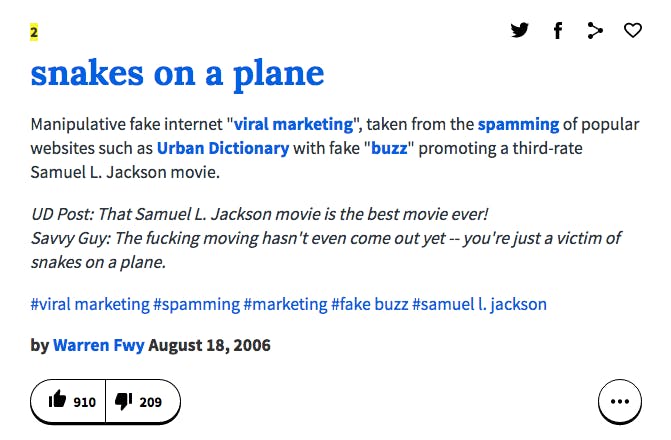 I have a different theory, however: We just weren’t ready. Snakes on a Plane took off just as platforms like , Twitter, and Facebook were inching into our consciousness. If anything, it was ahead of its time. The same factors that today ensure everybody is binge-watching Stranger Things or True Detective (season 1, anyway) were weak. The culture of internet irony and memes and shitposting was far from fully functional.

It’s impossible to guess what might have happened if Snakes on a Plane came out today—but it easily could have. All 30 major Hollywood studios rejected the screenplay back in 1995, and it was another 11 years before it made it into production. So imagine a world with Snakes on a Plane  filters and Instagram videos from the set. With Jackson narrating a Planet Earth spoof about venomous snakes. With a hundred million thumbs around the world hashtagging #SnakesOnAPlane, and airlines forced to reassure trolls that their flights are all reptile-free.

The result may have been no different, but it’s a motherfucking shame we can’t find out.