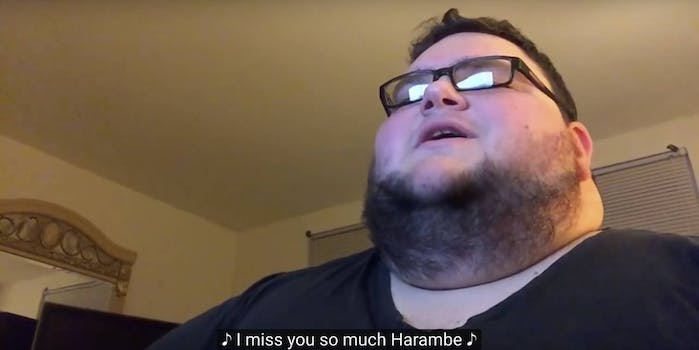 Jon Sudano lives in New Jersey, loves to play drums, and is the man behind one of the most pure memes to hit the internet in 2016. Sudano covers contemporary pop hits like Adele‘s “Hello” and John Lennon’s “Imagine,” juxtaposing the lyrics of Smash Mouth‘s “All Star” to their melodies.

His YouTube channel boasts one legitimate cover of the Neon Genesis Evangelion theme song “A Cruel Angel’s Thesis.” Everything else is just Smash Mouth all the way down.

It’s somewhat similar to the San Jose, California, band’s own approach to their music. Before Smash Mouth took the world by storm with their quintessential late ’90s banger, they were jamming out in their garage for hours on end, playing and perfecting the same song over and over.

Sudano has been cranking out Smash Mouth mashups for about a week and has already hit over 10,000 subscribers, which he thanked in a video on Wednesday. In an interview with Rock Feed, Sudano praised the “non-ending spam party of love and support” that’s filling his Facebook page—likely why I never got an interview with him.

He’s looking to cash in on his meme status and points to Taco Bell as a particularly lucrative sponsor he’d like to court. But Sudano’s pretty savvy and even nouveau rickrolled Rock Feed, doling out advice by quoting—you guessed it—Smash Mouth.

And that’s perfectly fine! There’s nothing deeper to dig into. It’s just pure joy of a man belting out a song from the Mystery Men soundtrack and winning the hearts of the internet in the process.