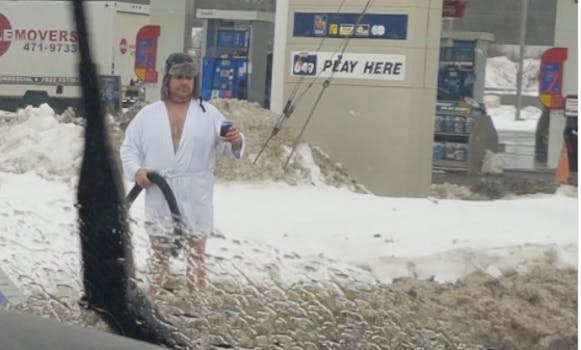 There's an inspiring purpose behind this hilarious tribute.

In one of the closing scenes of National Lampoon’s Christmas Vacation, Clark Griswold affectionately says Cousin Eddie’s “heart is bigger than his brain.” The same could be said of Eric Anstey, who recently recreated Eddie’s “shitter’s full” scene to absolute perfection in Lower Sackville, Canada.

And like Eddie kidnapping Clark’s boss, there’s an oddly heartwarming backstory. Anstey did it as part of his “12 Dares of Christmas,” his personal effort to raise money for a scholarship in honor of Rylee Sears, his cousin who died of meningococcal meningitis last year. Sears was 16.

“I’m happy to entertain, but the most important thing for me was the donations and getting as much money as I could for the kids about to start their college careers,” Anstey told BuzzFeed Canada. “He was an outstanding young man, he was one of those kids that was kind to everyone. Polite and friendly, and really cared about people.”

The Cousin Eddie tribute was day seven. He’s already shaved his beard, taken a two-minute ice bath, and sang Christmas carols at Costco—and he’s raised more than $3,000 in the process. Oh, and did we mention he lip synced Whitney Houston in his wife’s dress?

You can follow Anstey on Facebook to see what dare he tackles next, but it’s going to be hard to top his National Lampoon’s tribute.