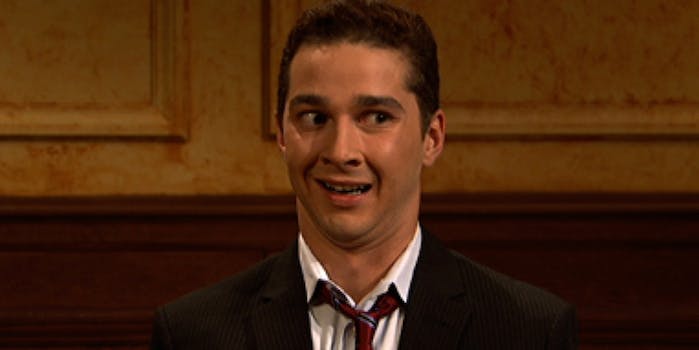 The Transformers star was hit with another cease-and-desist. Here's what he did with it.

At what point do we surrender to the inevitable and admit that Shia LaBeouf’s Twitter exploits are at least as attention-seeking as Miley Cyrus’s?

First there was that whole thing where he was accused of plagiarising his short film from a book by acclaimed graphic novelist Daniel Clowes.

Then he attempted to apologize on Twitter, using a quote copied from a Yahoo! Answers discussion about plagiarism vs. transformative art.

And when that didn’t seem to win anyone over, he took to skywriting his messages directly to Daniel Clowes… even though Clowes was nowhere near him at the time, and probably wasn’t interested in LaBeouf’s imaginative decision to apologize via vapor trail anyway.

Possibly attempting to capitalize on the suggestion that his social media antics could be classified performance art, LaBeouf’s latest contribution to the plagiarism debate was to tweet a photo of a storyboard he was working on. A storyboard for a film called “Daniel Boring” that bore a startling resemblance to a Clowes comic called David Boring. He even described it in Clowes’s own words: “Fassbinder meets half-baked Nabokov on Gilligan’s Island.”

Storyboard for my next short “Daniel Boring” its like Fassbinder meets half-baked Nabokov on Gilligan’s Island pic.twitter.com/sarRnqYws4

He went on to tweet photos of what appear to be cease and desist letters from Clowes’s lawyers, referring to his “clear copyright infringement” and calling LaBeouf “seriously out of control.”

Is Shia LaBeouf a deeply misunderstood artist with a biting self-referential wit? Well, perhaps if you think it’s hilarious to copy Kanye West’s 2009 MTV Music Awards apology tweets to Taylor Swift, all while referencing the fact that you’re being accused of blatant plagiarism.

At this point, we can only wonder which will come first: Shia LaBeouf deleting his Twitter entirely, or Daniel Clowes finally giving in and suing him for real.