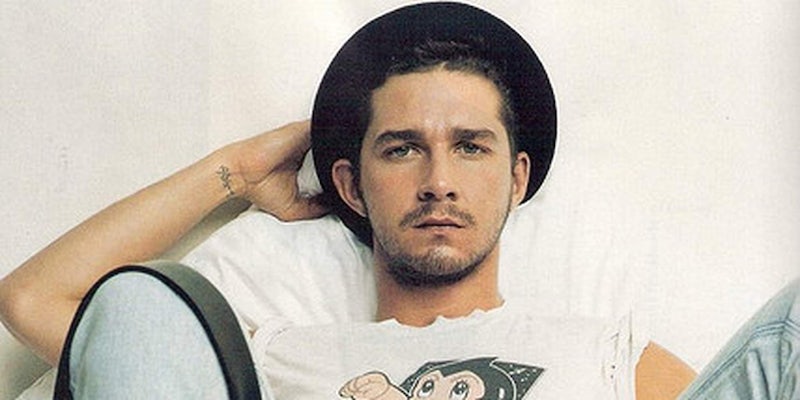 Is this experimental art, or do we just have a troll on our hands?

It’s no secret that the last few weeks of Shia LaBeouf’s apologies were all part of an elaborate joke that only he was in on, and he spent much of yesterday retweeting articles to prove that. His methods draw the inevitable Joaquin Phoenix performance art comparison, but really, LaBeouf’s “art” is far more insidious than any seemingly similar pieces of performance art.

Back in 2010 when Phoenix revealed that his bearded, mumbling, drug-addled rocker persona was actually a two-year long performance art piece for director Casey Affleck’s documentary I’m Still Here, critics were not pleased. Despite the reveal that appearances like Phoenix’s 2009 interview with David Letterman were all part of the act, critics like Roger Ebert remained incensed, and many felt led on by what they viewed to be a hoax, especially given that the movie never reveals that it’s all an act. Affleck jumped into the fray, defending the fact that neither he nor Phoenix intended for it to appear as a hoax, and ultimately everyone moved on.

But what LaBeouf is doing is not the same—it’s worse. Whereas Phoenix simply dismantled all the good will he had earned after his Oscar-nominated turn in Walk The Line, LaBeouf actually did fuck up originally by plagiarizing the work of artist Daniel Clowes in the making of his short film, HowardCantour.com.

His first apology alone drew criticisms that it too had been plagiarized, but somehow, both critics and defenders were still of the mindset that LaBeouf knew he had made a mistake, and was just trying to get out from under it as quickly—if ill-efficiently—as he could. Yet the apologies continued on Twitter, and with them, more references to how they had been plagiarized as well. (He’s even retweeting acknoweledgements from other writers he’s “borrowed” from.)

But no matter how much LaBeouf takes to the sky and tries to pretend this is all a disgusting blend of performance art and a study in schadenfreude, the simple fact remains: he stole someone else’s work.

By plagiarizing his initial apology and following up with over a dozen less-than-contrite subsequent “apologies,” it makes LaBeouf even more of a villain—he simply does not care in the least that his “art” came at the hands of stealing someone else’s. While Phoenix and Affleck made a bad movie, their offense was forgivable because no one else was actually hurt in the process.

The viewing public has shown an immense propensity to forgive and forget: just ask Martha Stewart, Robert Downey Jr., even Letterman himself. It took Anthony Weiner a second related scandal to unearth the goodwill he built up after his first. But what each of those famous fallen figures had in common was contrition.

And perhaps LaBeouf’s performance piece is precisely meant to turn the lens on what allows some people to get a free pass, and others to burn, but if that’s the case: one) why do it at the hands of a real artist’s work? And two) why do we care?