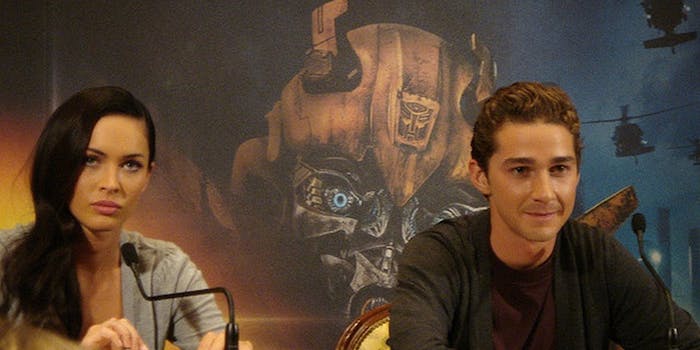 Did Shia LaBeouf plagiarize his apology for plagiarism?

The actor admitted his new independent film was based on a Dan Clowes comic.

An unlikely celebrity has come to the forefront of a debate about transformative art and plagiarism: Shia LaBeouf.

When LaBeouf’s short film HowardCantour.com was made available online this week, people immediately began noticing similarities to a comic by acclaimed graphic novelist Daniel Clowes. In fact, not just similarities. Some parts seemed to have been lifted directly from Clowes’ book Justin M. Damiano, dialogue and all.

Clowes isn’t credited on the film, or mentioned in any of the original publicity materials. Even if you go for the charitable explanation that LaBeouf meant the film to be a partial adaptation, HowardCantour.com was promoted as “a film by Shia LaBeouf,” which doesn’t really leave much room for misunderstanding. LaBeouf was obliged to make some kind of public statement, but he did it in the worst way possible: by using language that may actually have been copied from another source.

Yes, that’s right. It seems like LaBeouf’s plagiarism apology may actually have been plagiarised itself.

Copying isn’t particularly creative work. Being inspired by someone else’s idea to produce something new and different IS creative work.

In my excitement and naiveté as an amateur filmmaker, I got lost in the creative process and neglected to follow proper accreditation

Im embarrassed that I failed to credit @danielclowes for his original graphic novella Justin M. Damiano, which served as my inspiration

LaBeouf actually has four other directing credits to his name, so “naive amateur filmmaker” may be pushing it a little, but then there’s the fact that one of these apology tweets looks suspiciously similar to a Yahoo! Answers post from four years ago. In a discussion about the difference between plagiarism and artistic influence, one Yahoo! poster wrote: “Being inspired by someone else’s idea to produce something new and different IS creative work, and it may even revolutionalize the ‘stolen’ concept.” Sound familiar?

Now, this may just be an incredibly weird coincidence. It might also be a vaguely trollish meta joke, referencing that other time Shia LaBeouf plagiarised someone else’s words during a public Twitter apology. But right now, the simplest explanation is that he thinks he can still get away with copying other people’s writing word-for-word.

In light of the many people who are now retweeting copies of the original Yahoo! Answers post LaBeouf allegedly plagiarised, it seems like his final apology tweet is even more relevant than before.