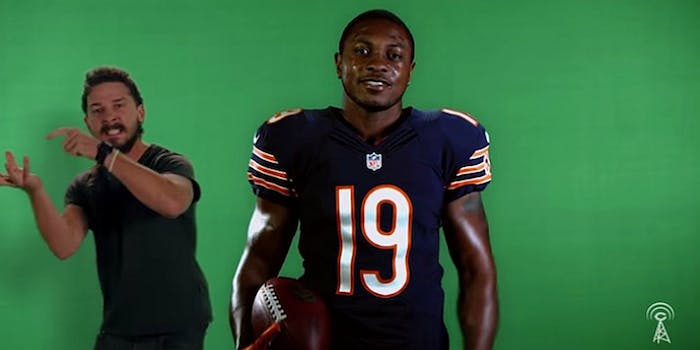 Even the Chicago Bears are in on this Shia LaBeouf meme

All they wanted to do was take a few pictures.

Put an actor—and destroyer of the entire Indiana Jones franchise—in front of a green screen as he lays down his performance art pep talk, and you get all kinds of excellent memes (including this guy trying to get Shia LaBeouf off his porch and LaBeouf joining in on an intense Haka).

Now the Chicago Bears are getting in on the act: In this remix, a few players attempt to stage some photos but are continually interrupted by LaBeouf’s commands to “Do it! Just do it!” His antics appear to particularly annoy linebacker Lamarr Houston here.

Overall, we think receiver Eddie Royal had the right idea at the beginning of the video when he laughed and said, “This is weird for me.”

Good call, Eddie Royal. Shia LaBeouf makes it weird for all of us.