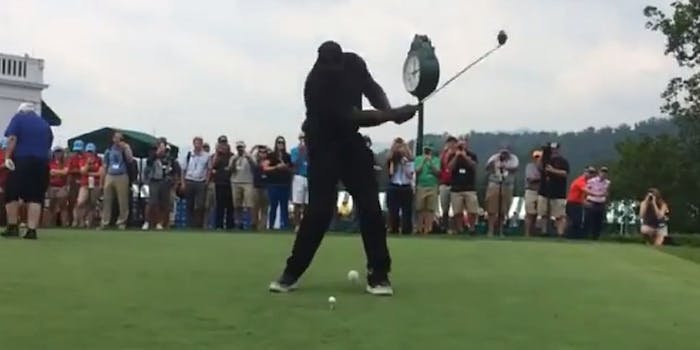 He can't hit a golf ball to save his life.

Shaquille O’Neal stands 7-foot-1, weighs (probably) much more than 300 pounds, and is one of the most dominant pro basketball players in the NBA‘s history. He plays golf as well, but that doesn’t necessarily mean he plays golf well.

Of course, that’s easy to determine when you watch the video below of O’Neal trying to drive a golf ball at Wednesday’s pro-am tournament at the Greenbrier Classic. His lack of grace is somehow beautiful to watch.

My favorite part of the video was his celebration after he made contact—he appeared to pay homage to Chi Chi Rodriguez with his sword-sheathing gag (it’s too bad he didn’t do that when he was missing free throws in the NBA).

O’Neal, as you might know, is an NBA analyst on TNT along with Charles Barkley, who’s long been known as a former basketball star turned awkward golfer. So, when asked for comment, at least O’Neal could point to somebody even worse than he is at golf.

And that superiority over Barkley is not out of the realm of possibility. After all, when Shaq makes contact, the ball can go a thousand feet down the fairway.

But ultimately, Shaq’s potential is not what we’ll take away from his double-mulligan drive on Wednesday.

Poor Shaq. All smiles today. Let kids in gallery hit shots for him. Signed autographs. Took selfies. Everyone will just remember the whiffs.