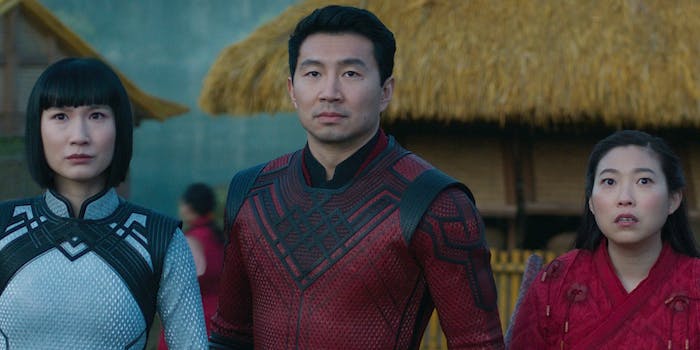 What ‘Shang-Chi’s post-credits scenes mean for the MCU

There are plenty of implications.

This article contains spoilers for Shang-Chi and the Legend of the Ten Rings.

For all of its more mystical components and one very big Iron Man 3 cameo, Shang-Chi and the Legend of the Ten Rings is largely a standalone origin story. And while those Shang-Chi post-credits scenes hint at the larger universe at hand (as most post-credits scenes do), they are still very much grounded in the film’s central family drama.

The film ends back in San Francisco as Shang-Chi (Simu Liu) and Katy (Awkwafina) recap the events of the movie and their encounters with Wenwu (Tony Leung), Xialing (Meng’er Zhang), and the hidden realm of Ta Lo while out for drinks with a couple of their friends. To us, Shang-Chi and Katy telling us about the Ten Rings, the Great Protector, their team effort to kill the soul-eating Dweller, and Xialing’s plans to shut down the Ten Rings is a nice refresher. Their friends, who haven’t watched Shang-Chi, believe that Shang-Chi and Katy are making fun of them—up until Wong (Benedict Wong) opens up a portal and insists that Shang-Chi and Katy have to come along with him.

As the post-credits scenes show us, even though Wenwu was among the many casualties of the film’s final battle, his children have inherited some part of his legacy. The bigger question is, what will they do with it?

The post-credits scene appears to take place immediately after the film ends in Wong’s office as Carol Danvers (Brie Larson) and Bruce Banner (Mark Ruffalo) call in; Bruce is wearing a sling on one of his arms. They’re trying to determine the origin of the rings, but they’re all stumped. According to Shang-Chi, Wenwu found the rings around 1,000 years ago (and prolonged his age), but a scan shows that the rings are much older than that. The rings don’t line up with anything that any of them have encountered previously (both human and alien), and Carol and Bruce confirm that the rings aren’t made of Vibranium or Chitauri technology.

Shang-Chi gained full control of the rings just before the Dweller killed Wenwu, which is something that Wong felt happen. The rings, Shang-Chi is told, are like a beacon, although they have no idea who’s on the other side or what kind of message the rings sent.

In the comics, the Ten Rings—which were actual finger-sized rings and not the arm bands that Wenwu and Shang-Chi wear—were created by Makluans (an alien species that looks like a dragon) and ended up on Earth after a Makluan explorer landed in China. The Mandarin then took the rings for his own; perhaps not so coincidentally, Mandarin is one of the names that Wenwu used over the years (and Trevor Slattery appropriated). Another possibility is that the Ten Rings’ vast age may tie them to Eternals, which follows a group of people who’ve been watching over Earth for 7,000 years.

But none of what Carol, Bruce, and Wong hint about has anything to do with Makluans, the Eternals, Celestials, or Deviants. They’re all there to let Shang-Chi and Katy know that their lives are about to drastically change.

“I know this is a lot to take in, but you’re gonna have to start getting used to that,” Wong tells them before suggesting that they get some rest. But Shang-Chi and Katy aren’t known for resting up when they should. Instead, they take Wong out to karaoke, where all three of them start belting The Eagles’ “Hotel California”—the song that Katy once used to confuse racist classmates who tried to beat up Shang-Chi in high school and that she tried to employ later in the movie with far less successful results.

The way that Shang-Chi tells it, Xialing is shutting down their father’s operations in China. And when we see Xialing taking down posters in her childhood bedroom, that seems to be the case until Razor Fist (Florian Munteanu) comes in to let her know that everyone is waiting for her.

“Let’s get started,” she replies. “We have a lot of work to do.” She makes her way to her father’s old throne and sits on it before the camera zooms out of the compound. There are a few familiar faces like Jon Jon (Ronny Chieng) from the Golden Daggers Club, but it’s what’s different—mainly the colorful graffiti on the walls of the compound and the presence of women training alongside the men (something Xialing was never allowed to do)—stands out far more.

The scene ends with a message: “The Ten Rings will return.” According to Marvel Studios head Kevin Feige, that’s less a reference to a potential Shang-Chi sequel and more toward the organization itself. But what does that look like? A task force working for good? A new assassin ring? (Not to mention the biggest one we know of in the MCU now that the Black Widow program is truly done.) A major thorn in Shang-Chi and the MCU’s side? No matter what, under Xialing’s management, the Ten Rings will once again be a force to be reckoned with.