"We have children that look at our face books [sic] from time to time!" Heather McGill wrote last night in a rambling monstrous paragraph.

The wife of an Alabama state senator is furious that real and possibly not real women simply will not stop approaching her husband over Facebook, sending him decidedly real pictures and inviting him, in her words, to “explore.”

“We have children that look at our face books [sic] from time to time!” Heather McGill wrote last night in a rambling monstrous paragraph that was destined to go viral as soon as the smoke cleared from her keyboard. “Shame on you!

Shadrack McGill, Heather’s husband, was first elected in 2010 and represents the state’s eighth district. He is, according to his wife, “a God fearing, hard working, ministry minded, loving father.”

It is her “duty,” in turn, “to lovingly serve him by protecting him!” And Shadrack, according to Heather, needs lots of protection. Ever since he got elected, a veritable tidal wave of real (and possibly not real) hussies have flooded his Facebook page with totally inappropriate messages.

Multiple times since being in office he has gotten emails from women (who may not even be real) inviting him to explore,

“NO MORE!!!” she declared, before threatening to out every single one of the women (including, ostensibly, the fake ones).

“Next time everyone will know who you are!! For I will publicly share your name before we ‘unfriend’ you.”

Shadrack, for his part, was nothing but proud of his wife. In the comments, he thanked his “babe”

Thank you my dear loving help mate for doing some much needed house keeping on our face book page. You are a wise woman and If you were running for my senate seat, I would vote for you babe.

The full post is available here, though we’ve posted it below for posterity: 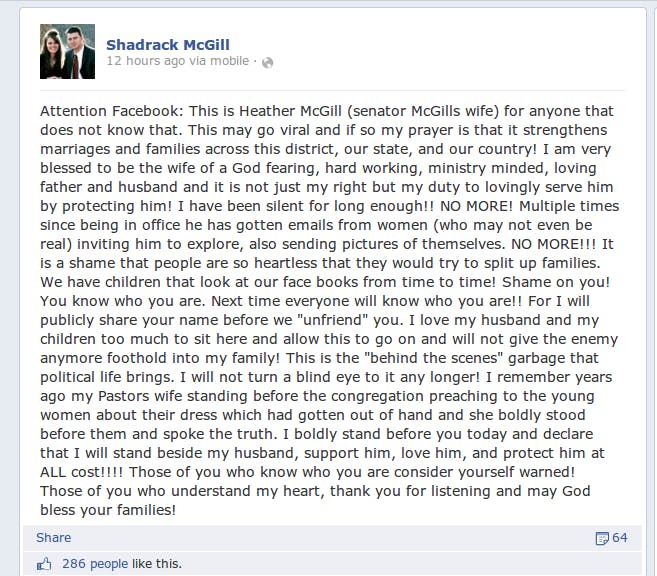