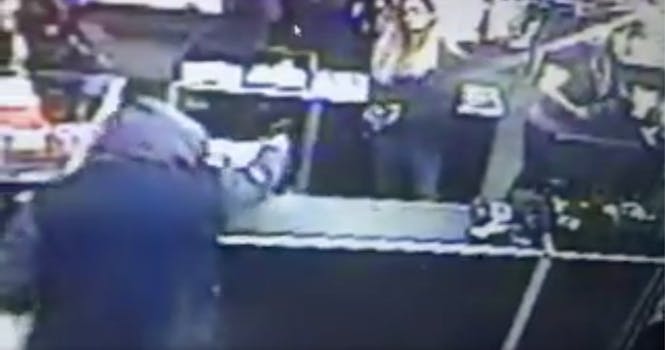 Any tool is a weapon if you hold it right.

A robber may have thought he’d found an easy target when he walked into a San Bernardino sex shop with a fake gun. But he hadn’t, not by a longshot: hH fled the scene after the store’s manager and another employee pelted him with sex toys.

Is there surveillance video of this incredible incident? You already know that there is. ABC 7 has obtained it, and they report that it is “CRAZY.”

The station also spoke to the two “feisty” employees of Lotions & Lace, who were exasperated at having to deal with a lame-ass robbery attempt while they were trying to close the store Wednesday night.

“With the gun, he walked in. I just thought he was trying to be funny, to scare us,” said one of the two heroic women, alias “Amy.”

“But then I saw the gun and it was like, really? I don’t have time for this.”

“I think he was a coward,” the other woman said. “Coming in and trying to get over on two females and not realizing that we’re pretty feisty.”

The man didn’t manage to steal anything before he took off.

ABC 7 reports that police don’t recommend confronting armed robbers. They didn’t make this explicit, but I imagine police would also not recommend attempting to rob two women armed with a bevy of sex toys when all you have is a toy gun.