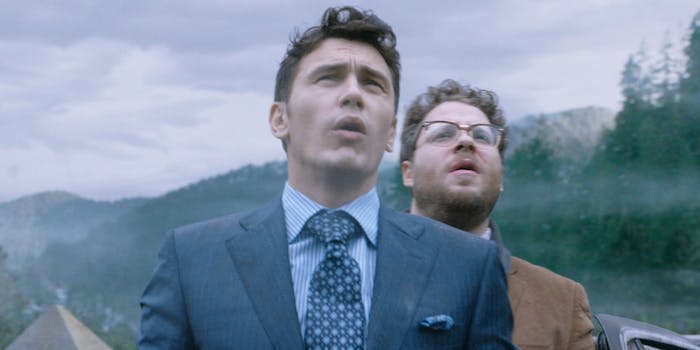 Getting canceled is the best thing that could have ever happened to The Interview.

You’re a movie studio. You have a film on your hand no one likes all that much. One of your own executives calls it “desperately unfunny.” Reviewers seem to agree, and when the movie hits theaters, audiences are likely to not show up at all, especially if they could go see The Hobbit or Into the Woods instead. What do you do?

The news that Sony Pictures is cancelling the release of the controversial Seth Rogen–James Franco vehicle The Interview undoubtedly seems bad for the studio, after a month of nothing but bad news. FiveThirtyEight’s Nate Silver reports that Sony stands to lose $100 million by pulling it from theaters, after terrorists threatened to take action against any studios that showed it. This figure is based on the earnings of comparable R-rated comedy titles, but let’s be honest: A bad movie that everyone was going to stay away from anyway (because who wants to be the victim of a terrorist attack on the holidays?) is anything but a loss for the studio. If anything, Sony bought themselves one giant re-branding opportunity.

This might seem cynical, but think about it from the perspective of a studio head, whom we can both imagine is chomping a cigar at this very moment. The Interview might be a piece of crap (Entertainment Weekly called it a “nonstop sledgehammer of bro humor”), but it’s suddenly become an incredibly important piece of crap, a must-watch whenever it does come out. Overnight, Sony’s impending box office bomb turned into a major movie event. Even Silver says he’ll be first in line.

Let’s first take a look at the numbers. Nate Silver suggests that the aforementioned $100 million gross (actually $104 million) would represent an average of recent R-rated comedy releases marketed to a similar audience, including The Heat, 21 Jump Street, and Kick Ass; however, all of those films were well-reviewed and didn’t have terrorist death threats hanging over them. Bad Boys 2 and Jackass 3D were both part of a pre-existing franchise with better-received entries to give them a boost. The best comparison then is Michael Bay’s Pain and Gain, which garnered similar reviews en route to $88 million at the worldwide box office. That’s twice The Interview’s production budget of $44 million. Doesn’t sound so bad, right?

Not exactly. For a movie to earn its keep for a studio, it generally has to make back at least twice its production budget to account for international distribution costs and marketing, and The Interview was unlikely to recoup costs, given its current market issues. The widespread panic over attacks on a theater in Aurora showing The Dark Knight Rises led to a 16 percent decrease in the film’s overall gross in the U.S.—when compared against the $533 domestic gross of The Dark Knight. That was an attack on one theater. How much worse would the box office dropoff be if that threat were looming over every theater in America? And with domestic distributors getting spooked, it’s likely foreign markets would follow suit.

That likely means that, charitably, The Interview would have grossed $73 million around the world, losing the studio a minimum of $15 million—probably more, a lot more.

With movie theaters out of the equation, Sony pictures will be forced to explore alternate release strategies for The Interview in order to recoup their budget, including Video On-Demand and streaming. Since the same day release of Steven Soderbergh’s Bubble in theaters and on VOD, studios have long flirted with simultaneous release—to limited success. The reported box office grosses for Bubble were $261,000, a figure that could barely pay for the craft services budget on The Interview. It’s unlikely VOD netted much more cash. (Maybe a million in total?) But Bubble had two things working against it: The movie was released in 2005, just before the golden age of the digital revolution, and got very, very mixed reviews. It felt more like another one of its director’s experiments than a serious attempt at killing the multiplex.

As nearly every movie-industry thinkpiece published this year will tell you, the situation has changed considerably in the past decade. In 2014, theaters are already dying—with Netflix and Amazon becoming their own competing powers. This year, former box-office powerhouse Adam Sandler inked a four-movie deal with Netflix, which is working to develop movie studios to match their successful foray into original TV, after launching breakout hits like Orange is the New Black and House of Cards. In order to conquer film, Rolling Stone’s Gary Susman warns that Netflix will have to change the way we watch movies. But if they’ve already forever changed television, why can’t streaming finally compete with Hollywood?

Earlier this year, Bong Joon-Ho’s Snowpiercer offered our first glimpse at what an effective VOD launch can look like. The well-reviewed sci-fi thriller doubled its domestic total through streaming release, earning $11 million in the U.S. That might sound like pennies for The Interview, but it’s actually a great sign: Bong is the Korean auteur behind The Host and Mother, a name unknown to 95 percent of Americans. The Weinstein Company thought the movie was so unmarketable that they battled with Bong over final cut, with many worried what version of the movie audiences would see, if we got to see it at all.

By comparison, The Interview stars two of the most recognizable names in American cinema today. It might not have Snowpiercer’s reviews, auteur credibility, or quality, but it sure has an easier marketing campaign. A movie of The Interview’s size has never dabbled with VOD, which (along with the film’s current notoriety) makes the film a groundbreaking cultural event. This time last year, Beyoncé proved what a little breaking of the Internet can do: selling 1.3 million copies of self-titled digital album in three weeks, despite the fact that people don’t buy records anymore. Beyoncé proved that they will come, if you give them a reason.

If Sony wants the last laugh, my advice is to release The Interview on Christmas, just as planned, but to launch it on VOD as Hollywood’s first-ever surprise release. Not only would we stop the terrorists from winning, Sony could turn a potentially costly piece of holiday coal into the Internet’s first blockbuster. If I were Seth Rogen and James Franco, I wouldn’t assassinate Kim Jong-un. I’d send him a thank you card.