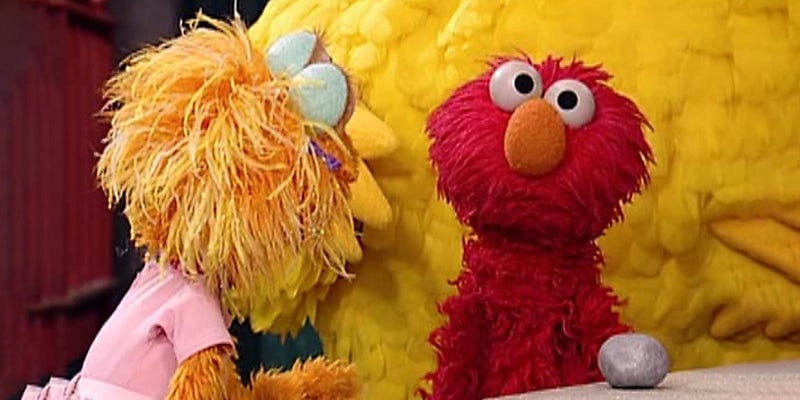 One of the biggest feuds to kick off 2022 isn’t between two major celebrities, sports stars, musicians dissing each other on new tracks, or even two humans. Yet, thanks to the reemergence of a Sesame Street clip from 2004, we’re captivated by the apparently longstanding beef between Elmo and Rocco (aka Zoe’s pet rock) all the same.

Even before people became aware of this beef, Elmo, perhaps the world’s most famous 3 1/2-year-old, has been having something of a moment. Several Elmo clips have gone viral on TikTok over the past few weeks, highlighting his pronunciation of “paper towel roll,” the emphasis he puts on the phrase “Elmo chugs along like a train,” and his own amazement over “balsamic vinegar” during a cooking segment with Jimmy Fallon. That interest eventually made its way to Twitter, where even more clips, such as Elmo’s purposeful New York accent that pops up during a nearly five-year-old video where the Sesame Street cast answered the most-Googled questions about the show, popped off.

But perhaps the greatest rediscovery in Elmo’s decades-long career on Sesame Street was yet to come. On Jan. 3, @wumbooty tweeted a 35-second clip from a 2004 episode of Sesame Street featuring Elmo and Zoe fighting over an oatmeal raisin cookie. The argument? Zoe says it’s for Rocco, but Elmo thinks that argument is absurd because Rocco isn’t even real—it’s a rock.

“How is Rocco gonna eat that cookie, Zoe?” Elmo asked. “Tell Elmo. Rocco doesn’t even have a mouth! Rocco’s just a rock! Rocco’s not alive!”

The video, which was originally posted on Twitter by @_XMLKS in response to Elmo’s New York accent, has been viewed more than 7.2 million times on Twitter.

Elmo’s anger and frustration over Rocco being treated like a pet that’s alive and well when Rocco is, in fact, a non-living rock is palpable. He knows that Rocco isn’t real, but everyone around him, both human and Muppet alike, is treating Rocco like a member of the family.

Soon, more clips featuring just how much Elmo doesn’t like Rocco started to emerge. Some of the clips were from the same episode. But as more and more Sesame Street clips emerged, people also noticed just how easily Elmo became exasperated with Zoe.

The feud blew up enough that Elmo finally saw the need to clarify a couple of things: He and Zoe? They are totally cool now. But he still has issues with Rocco and he really doesn’t want to talk about it.

Elmo’s response to the reemergence of his feud with Rocco has done little to quelch the feud itself. Memes already started showing up before Elmo posted those tweets, but even more memes came out afterward.

Elmo was also asked about his other beef with Fallon.

“The way @elmo refuses to let Zoey gaslight him is the kind of energy I’m bringing to 2022,” @regledujeu tweeted.

The Elmo/Rocco feud is a bit of silly nonsense. It’s incredibly harmless, taps into both our collective nostalgia for Sesame Street and a relatable kind of frustration—being told something that isn’t real, totally is—but gives us clear and surmountable stakes. In the fight between Elmo and Rocco, only one can win.