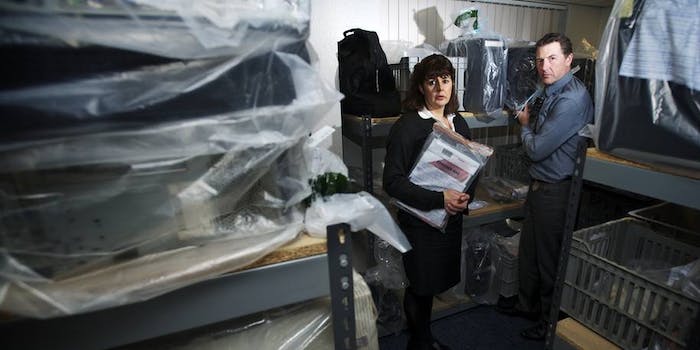 The real problem with Serial is its fans

Serial fans won't get their happy ending, because true crime doesn't have one.

As millions of fans await the hotly-anticipated finale of Serial, the wildly popular true-crime podcast from This American Life producer Sarah Koenig, debate about how the show will end is reaching a fever pitch. But as it becomes more clear the show likely will not end with a definitive, line-drawing conclusion to the 1999 murder it centers on, fans are in a minor state of revolt (this article will contain many spoilers so do not read unless you have listened to the most recent episode).

Fan commentary around the show took a decidedly cynical turn last week after the release of the penultimate episode, entitled “Rumors.” In it, Koenig examines the oft-theorized claim that Adnan Syed may be a psychopath, fooling his loved ones and even Koenig herself into believing in his innocence. As the episode rounded out, it became clear Koenig has no big reveal into the murder of Hae Min Lee or her accused murderer, Adnan. All the study of Adnan’s character has been pointless.

Which is to be expected. This isn’t a polished Hollywood story. Despite the sheen of Serial’s production values, the story it tells—and the mystery it attempts to solve—exists in the real world, not a screenplay. How well the show rides the line between entertainment and journalism is the topic of much debate between media types and bloggers, though most seem to miss the central point of how Serial’s fans are changing the narrative of the show itself.

That is, not the narrative within the show. Despite the many theories fans have developed and the active participation in said speculation by friends and family members of those who knew Adnan, Jay, or Lee, Koenig has largely refused to acknowledge the show’s popularity or the fanbase itself. “I’m not looking at Reddit,” Koenig confirmed to the New York Times.

With the show’s shocking popularity has come a level of scrutiny not just into the case Serial covers but into the ethics of Koenig’s reporting. In Spook magazine, Stephanie Van Schilt categorized the podcast as a “dead girl drama” that “[murders] the victim by silencing her in her own story.” In a scathing review, Chris Satullo calls Koenig “a criminal justice novice,” saying “it seems Koenig’s true topic is not the factual case, but her own feelings about it.”

To regular listeners of the show, this might come as a shock. Koenig shows immense restraint in her reporting, often refusing to participate in the sort of speculation that drives the fanbase. In last week’s episode, she even teased a massively incriminating rumor that, if true, would close the mystery of who killed Hae Min Lee. In a move sure to infuriate fans looking for every detail about the case, however, Koenig refused to reveal a single detail about the rumor because she could not substantiate it.

At a time when the media is filled with “unverified” reports, the idea Koenig’s ethics could be questioned is almost fantastical. Major cable news networks regularly air footage or social media posts without the slightest clue to their true origins, shielding themselves behind brief disclaimers. If you want to attack a dwindling sense of responsibility within journalism, there are people with larger audiences acting far more recklessly than Sarah Koenig.

What’s driving these criticisms is not any misstep on Koenig’s part; all crime reporting is inherently voyeuristic in nature. Where Serial finds itself is the latest in a great number of cultural obsessions. Despite telling a true story, Serial and its fanbase often feels like those surrounding True Detective or House of Cards. As Slate’s Willa Paskin writes, “everything surrounding Serial, all the elements that make up the Serial-related experience, are familiar: the Reddit page, the think pieces, the in-jokes, the dedicated recaps.”

Which means the core audience of Serial is largely treating it as a work of sensationalized fiction, often to the detriment of the very real people involved in the story. While Lee’s family has refused to speak out, her brother made a one-time stop by the subreddit to call the fanbase “disgusting,” saying “to you listeners, it’s another murder mystery, crime drama, another episode of CSI. You weren’t there to see your mom crying every night.”

The extent to which Serial fans are removed from the people and events surrounding Lee’s murder became clear last week when Best Buy and Sesame Street tweeted jokes about the show, in the same way DiGiorno’s Pizza might live-tweet Peter Pan Live. It’s hard to imagine a company doing that about other true crime works, like In Cold Blood or Helter Skelter.

Sarah Koenig, however, is not to blame for the escapist way fans are treating the show. What she has presented is a meticulous work of journalism, a story focused on our assumptions about justice, deceit, and intrigue. Koenig displays throughout the podcast a rigorous loyalty to factual analysis and, at times, outright criticism of emotional speculation. While she doesn’t always stray from letting listeners into her own thought processes, she never allows her own motives to influence her reporting.

Despite this, the show can often feel tailored to fit our binge-watching “spoiler alert” culture. But blaming Koenig for that perfect fit might as well be blaming her for doing exactly what she’s supposed to do. Serial breaks form with other podcasts by telling a story in its longform manner, and that means keeping people interested in what is clearly an important story to tell.

In their seminal work The Elements of Journalism, Bill Kovach and Tom Rosenstiel compare the business of news to a nude guitarist: You attract attention by being naked, but people stay because you can play guitar. News outlets need to not only attract attention but keep it.

The Nude Guitarist controls large swaths of our culture. Buzzfeed functions on this as a business model: “Come for the Love Actually GIFs, stay for our great reporting.” It’s why cable news outlets so regularly unfold the “Breaking News” chyron for stories decidedly less than “breaking.”

In the case of Serial, the story of a murder mystery is like nudity—we don’t need to be told to be intrigued. What keeps listeners coming back is Koenig’s slow drip of information each episode, the idea that we might learn something new. By following this basic model of news reporting, Serial accidentally feels a lot like Game of Thrones and has created the same kind of fanbase, despite all the events Serial concerns being quite true.

If Koenig can be questioned for structuring Serial in this way, the entire culture needs questioned. Koenig has driven immense interest in issues of criminal justice that lie in the back of most people’s minds, all by following a simple design principle that hardly violates any ethical quandaries. Serial’s biggest crime is being interesting. It’s our expectation that we all be baited towards fandom that has driven the show into the realm of fantasy for most listeners.