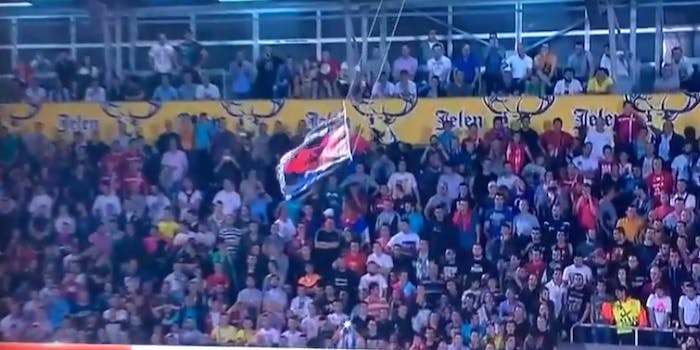 Albanians were banned from traveling to Serbia for this pivotol game.

A remote-control drone started a riot and caused referees to cancel a pivotal soccer game between Albania and Serbia Tuesday in Belgrade. Albanians had been banned from attending as visiting fans, but are credited with flying a drone into Partizan Stadium that held the Albanian flag, a map of Kosovo, and the phrase “autochthonous,” which means “indigenous.”

Serbian player Stefan Mitrovic yanked the flag from the drone. This led to a bench-clearing brawl between teams and chaos in the stands.

Football is meant to be fun, not war… #Serbia #Albania pic.twitter.com/S7xkknSGuI

We knew political tensions were in place for Tuesday’s Euro 2016 qualifier. Kosovo gained independence from Serbia in 2008, but Serbs still consider it an extension of their country—even though it is more than 50 percent Albanian (hence the “indigenous” slogan). Serbia blocked out 2,000 or so tickets for Albanian fans but on the provision that each ticketholder submit his or her name, address, and passport number; that notion quickly fell apart.

As for the drone itself, it costs about $762 and was reportedly a Phanton II.