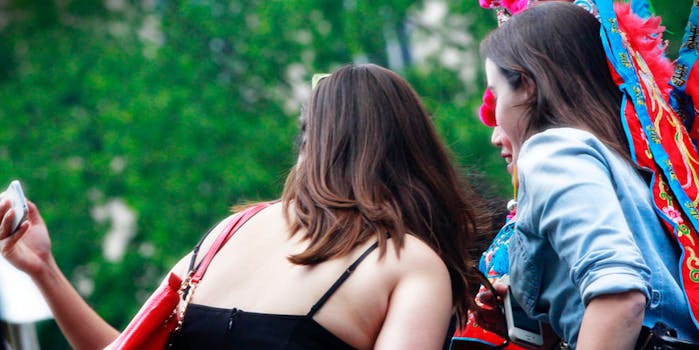 Do we need yet another selfie app? Maybe, if it lets us reach out and touch someone.

Selfie, an app that launched a few weeks ago, wraps up the tried-and-true methods of Vine, Instagram and Tumblr all in one. That may sound exhausting, but the experience encourages organic connection between strangers in a way that is oddly refreshing. Users record up to 24-second videos of themselves, and other users who follow them are able to reply with their own Selfie videos for a pseudo face-to-face chat. Other users can view those conversations on their feed and contribute as well, which makes for new connections and new friends—it’s like a message board come to life, and just like those types of forums, it can be used to discuss any topic under the sun. My limited experience with it so far has taught me that it’s something like a cross between a chat room and brunch with friends. Users can ask for advice, share expertise, tell stories, or strike up conversations with potential new friends—which often prompts people to eventually meet up in person.

I made an account to explore the app, and I found that it’s attracting cool people (and celebrities) from all walks of life—a bouncer at the Boom Boom Room, the designer of the MTV logo, and even Michael Strahan (yes, that Michael Strahan)! I also came across a slew of encouraging advice videos being shared between users, especially from wiser folks telling younger Selfiers that life will, in fact, get better. I did not expect to tear up on a damn socializing app! That’s what made me realize that a community like this may serve as a solution to the darker corners of social media that alienate people and pit them against each other. The Internet’s ability to connect strangers and make people feel like they are less alone is such an amazing thing, but most platforms are hit or miss when it comes to those kinds of connections—a fair share of hateful behavior, pretense and isolation has to be weeded out for it to happen. Selfie just kind of cuts through all that bitter white noise and gets straight to the actual “connecting” part, which is what all these social apps are meant to do in the first place anyway.

The reason for this, it seems, is the culture of respect that’s encouraged in the app. It’s still fairly new, so part of this could just be the result of a smaller, kinder community, but there are significantly fewer trolls and hate campaigns than can be found on other forms of social media. After all, users have to post a video of their faces in order to share any commentary or make replies, and that leads to a lot of more personal responsibility for their words. The app still offers the advantages of anonymity that let us feel comfortable with strangers—obviously, other users only know as much about you as you choose to share—but it doesn’t allow the same opportunities for senseless cruelty as, say, furiously typing an anonymous Tumblr comment in the middle of the night. In this way, using the app is a lot more like talking in person. Selfies can also be posted as private for only specific users to see, which makes it seem like a great way for extended families and tight-knit groups of friends to keep in touch while living far apart—like one big group Skype that never really ends.

I know the world is already overflowing with social media platforms, and I can’t say whether it’s ready for yet another, but Selfie might be onto something that others missed the mark on. There’s something very human and civil about it, and that alone is enough to convince me to stay tuned to see where it will go next.

Also on The Frisky: #TheQueenTweets: Queen Elizabeth II Has Sent Her First-Ever Tweet, Woman Gets Groper Arrested By Posting His Picture On Twitter