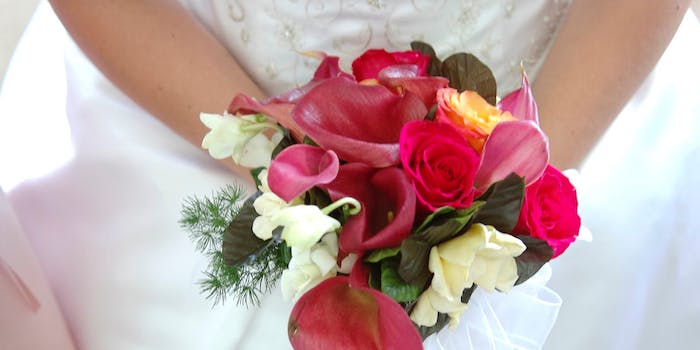 Getting married to yourself isn’t as crazy as you think

Selfie marriage is making the Internet raise its collective eyebrow. But there might be more to the trend than you think.

“Single British Woman Decides To Marry Herself”: it might sound like a headline pulled from the The Onion, but it really happened. This week, 31-year old British filmmaker Grace Gelder stood next to a mirror and married herself. In a ceremony conducted before her sister and a gathering of fifty friends, family members and associates, the bride committed to love, honor and cherish herself. And then she kissed her reflection. Gelder told the Guardian she was inspired by Bjork‘s “Isobel,” in which the iconic iconoclast sings, “My name’s Isobel/married to myself.”

When people read or hear the headline, often they dismiss this “selfie marriage” as just more self-obsessed millennial nonsense. But to ignore her story means you only notice the finger, and not what it’s pointing at. The facts are: Grace Gelder is the first Brit to ever marry herself. However, her marriage is not legally recognized in the U.K. Legal or not, let’s look past the punchlines at what Mrs. Gelder’s self-marriage points at: the undeniable fact marriage is ruining the world.

When news of a woman marrying herself hit the web, you could almost hear the Internet collectively roll its eyes. This is no surprise. Even the bride admitted some guests at her wedding said the whole affair was “narcissistic.” It’s doubtful Gelder would be surprised to learn strangers are poking fun at the single lady who got so tired of waiting for someone to put a ring on it, that finally, she did it her damn self.

But not everyone is laughing, and Gelder’s act provokes serious questions: What does it mean that in our hyper-connected world, where you can meet people with the ease of a swipe, women might feel the need to end their loneliness and marry themselves? Has marriage gained such status that people now feel empty, or like failures, if they can’t find someone to call their own?

There’s a reason that self-marriage is a story, but it would be reckless hype to call it a trend.

Grace Gelder isn’t the first person to walk herself down the aisle, and there have been so many others that self-marriage already has its own Wikipedia page. There are even websites that will help you with your vows. One self-married woman recently told Anderson Cooper how she used her wedding as a way to “empower” her relationship with herself. Acting against her culture, a young Taiwanese woman used self-marriage as a way to escape social pressure.

But selfie marriage isn’t all empowerment. As the accounts in the room would also remind us, where there’s a wedding, there’s a dollar to be made. There are already products aimed at the self-marrying bride. As reported by Cosmo, a woman can purchase a product called “I Married Me: Self-Wedding In A Box” for a mere $300.

However, the more basic, yet more telling, questions are the what we might ask when we discuss it over coffee or drinks. What about the wedding night? How did she consummate the marriage? What if she meets someone new? Will she divorce herself?

In other words, at the street-level, we want to scratch at answers to the essential question: Is this a “real marriage?” However, these are all the wrong questions to ask, despite how entertaining they are to speculate. The only question worth pursuing is this: What is she trying to prove, or rather: What has she proven?

To answer that, we should consider the bride’s opinion. From what Gelder told the Guardian, it’s clear she wanted to formalize a commitment to herself:

More recently, I’d been on a journey of personal development using meditation, dance and performance to increase my self-awareness. Included in this was a Shakti Tantra programme focused on sexuality and how this was bound up with making agreements with yourself and other people… [It] dawned on me that a self-marriage ceremony witnessed by other people would potentially be this massively powerful means of making those agreements stick.

Seems simple enough. Gelder feels she’s on her own and she wanted to seal a contract with herself and give it a sense of gravitas. Notably, she conducted her ritual before her social circle. Funerals and marriages are never about the people at the center; they are always all about those around them. A marriage is a social move. Grace Gelder reminds us that marriage is meant to be a way to sustain and advance society.

Marriage is one of the basic bonds of the family unit, along with parent-and-child, and sibling-and-sibling. As you and everyone else knows, the family is the “fundamental unit of society.” Whether by Nature’s urging, or due to the nature of tribal life, somewhere along the way we started marrying each other, and then we found nuclear families led to vibrant competitive societies.

Of course, people prefer to ask if Gelder herself is healthy. Can we chalk her choice up to a mental illness? Or worse, is she a victim of “the spirit of the times?” If we wish to dismiss her as crazy, then, she’s not much different than those psychological outliers who marry buildings, roller coasters, or the Eiffel Tower. As their pathology suggests, there are some people who feel perfectly willing and able to transfer their love to inanimate objects or famous landmarks. By society’s measure, Gelder is inappropriately transferring her love to herself (or to her mirror image).

Others might instead blame the zeitgeist, the apex example of a contemporary love affair of the self. For those who undress before webcams and make love to an anonymous world, those who dedicate hours to capturing and curating perfect selfies to document their journey with their self, Gelder may have climbed as high as we can hope to reach on Mt. Selfie. In other words, did she finally reach Peak Selfie?

Thanks to our vastly digitized lives, some people prefer to get married inside odd spots like the virtual world of Second Life; others tie the knot in the midst of a MMORG. When it comes to outside-of-the-box weddings, Dennis Rodman beat Gelder by a decade, and it seems unfair to lump her self-marriage in with other “stunt weddings.”

So, if Grace Gelder is mentally fit and her self-marriage isn’t as strange as it seems, what does it say about the nature of marriage? You will find weddings evident in all human communities, all around the globe, as well as a long and varied history of non-marriage human coupling, alternative pair dynamics, and even multiple person relationships.

In the past, empires were bonded by loveless marriages—they were arrangements of power, a way to do the business of kings and queens. Not much has changed, actually. Marriage is still about acquiring social power. It is inarguably conservative, sustaining civilization and “conserving” society. This is why, whether Fox News wants to admit it or not, same-sex marriage is essentially conservative. All marriage is.

Unlike when two people are denied their right equal protections under the law, Gelder has nothing to do with any historic legal struggle for civil rights. Quite the opposite. Gelder’s union calls into question all marriages, gay or straight, by pointing out the unequal protections society grants married persons. Now, for religious-minded folks, a woman marrying herself might feel like the latest domino to fall in the continuing devaluation of marriage as a result of marriage equality. But marriage equality and the notion of self-marriage are total opposites.

In These Times writer and activist Yasmin Nair is an outspoken critic of marriage equality, and as a queer woman, this puts her at odds with a large section of her community. However, she advances the same argument Gelder’s selfie marriage humorously points out: marriage isn’t necessarily healthy for society.

As Nair and others argue, consider the disproportionate rights, benefits, pensions, tax credits, paid family leave, as well as the many legal protections that aren’t available to single persons. Gay or straight, any marriage is an act that grants status and, most importantly, economic advantage. Grace Gelder couldn’t enjoy any of those advantages unless she found a partner willing to enter into a social contract with her. According to the U.S. Census, there are 32 million single adults living alone. That’s roughly a quarter of all American households, which adds up to a lot of inequality.

As we chuckle online at the woman who stared into a mirror to marry herself, we ignore the fact that all marriages are part of a conservative social contract, the basic unit of a classist system. One doesn’t need to apply a Marxist lens to self-marriage to see that capitalism is an arrangement of power that’s strangling the world. Like the little boy who told the Emperor he was buck naked, Gelder has pointed out that the institution of marriage is complicit with the socio-economics that benefit the few at the expense of the many.