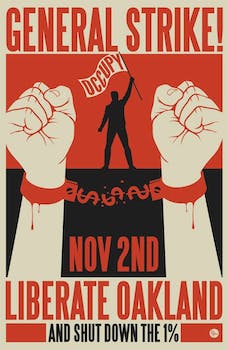 Occupy Oakland has teamed up with the largest union in the city for a demonstration to be held Wednesday in front of city hall.

The Occupy Oakland movement has teamed up with the largest union in the city to stage a demonstration Wednesday in front of city hall.

“To see a movement spring up that is articulating exactly what we’ve been saying, it’s beautiful to see that convergence. It was a no brainer,” Stallone told the Daily Dot. “We needed to be there.“

The union has not called for a strike and is instead encouraging their members to take time off from work by using vacation time or a furlough day, to join the demonstration, Stallone said.

About half the city employees are union members, Stallone said. The average salary of its members is between $50,000-$60,000 a year.

Stallone would not say how many union members will attend but expects “hundreds” to turn out at Frank Ogawa Plaza at 9 a.m. Wednesday.

“We are also part of the 99 percent,” said Dwight McElroy, president of the SEIU 1021,in a statement. “Our jobs have been cut, our people unemployed, and our community has lost needed services in these hard times.”

Other organizations participating in the demonstration include Alameda Central Labor Council, UAW 2865 and the Oakland Teachers Union OEA, reported the Occupy Oakland site.