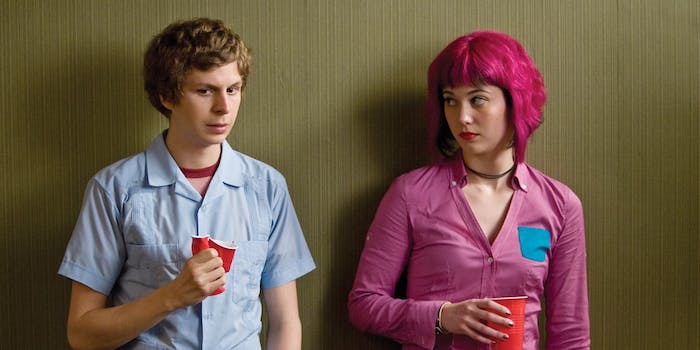 Scott Pilgrim vs The World/Amazon

From directorial choices to its iconic cast, this movie earned its place as a cult fave.

Genre-bending comic book movie Scott Pilgrim vs. the World just celebrated its 10th birthday, an anniversary that will either make you think “wow, I’m old,” or “yeah, that sounds about right.” Because really, this film is extremely 2010, from its indie rock soundtrack to an ensemble cast including Michael Cera, Mary Elizabeth Winstead, Chris Evans, Anna Kendrick, Aubrey Plaza, and a pre-fame Brie Larson. It’s a sign of the times that half of that cast are now best known for their work in superhero movies.

Based on the comics by Bryan Lee O’Malley, Scott Pilgrim is rooted specifically in the late-2000s Toronto music scene, and was partly inspired by shonen manga. Despite being a box office bomb at the time, the movie is a cult favorite because unlike many comic book adaptations, it really gets how to transfer the source material from page to screen. Director/co-writer Edgar Wright weaves video game imagery and anime editing techniques into what’s otherwise a fairly standard coming-of-age romcom idea: a story about a dweeby 20-something guy (Scott Pilgrim, played by Michael Cera) falling in love with a cool girl (Ramona Flowers, played by Mary Elizabeth Winstead) and playing bass in a local rock band. The plot follows his quest to defeat Ramona’s “seven evil exes” in a series of cartoonish battles, a journey that both follows and subverts familiar tropes about men treating women as prizes.

Scott Pilgrim definitely falls into the late-2000s trend for Manic Pixie Dream Girl stories, but like 500 Days of Summer, the film doesn’t necessarily endorse Scott’s point of view. You’re encouraged to root for him because that’s the driving force of the plot (and yes, all those video game rock battles are extraordinarily kinetic and fun), but honestly: Scott sucks. He sucks! The story is a knowing satire of a certain kind of young adult douchebag behavior, pointing out that while Scott is an underdog, he’s not always a sympathetic one. On a personal level he’s a whiny, self-absorbed disaster, and when rewatching the film now, some viewers will undoubtedly have a more negative view of his relationship with high-schooler Knives Chau, who he treats like crap. And is, just to be clear, still in high school.

So yes, Scott Pilgrim has some problematic elements, but it’s also more critical than you may remember. The darker shades of satire are just balanced out by Edgar Wright’s notable skill for visual comedy.

Scott Pilgrim has true staying power thanks to its unique visual style, its killer soundtrack (including original songs alongside Beck, Metric and The Rolling Stones), and its famously star-studded cast. After making Shaun of the Dead and Hot Fuzz in the UK (a pair of rightfully iconic geek-culture comedies), this was Edgar Wright’s American breakout film, and still outshines his later work like the overrated Baby Driver, which employed many of the same musical/editing techniques to lesser effect.

Somehow, Wright recruited an ensemble cast that put Scott Pilgrim permanently on the map for superhero movie fans. Previously appearing in Sky High, lead actress Mary Elizabeth Winstead went on to co-star in Birds of Prey. At this point Chris Evans had already starred in Fantastic Four but hadn’t yet achieved A-list fame as Captain America: a perfect choice for Ramona’s conceited actor ex-boyfriend Lucas Lee. (Those fake movie posters? Genius!) Then we have Brandon Routh (formerly Superman; now The Atom in DC’s Arrowverse franchise) and Brie Larson, aka Captain Marvel. And a cameo from Thomas Jane (the Punisher) as one of the vegan cops who arrests Brandon Routh’s character for cheating on his vegan superpowers.

If you’re feeling nostalgic, Edgar Wright has spent the 10th anniversary tweeting behind-the-scenes photos and announcing a new rerelease of the original soundtrack, plus some bonus songs. And, of course, you can watch Scott Pilgrim vs. the World on VOD and U.S. Netflix.