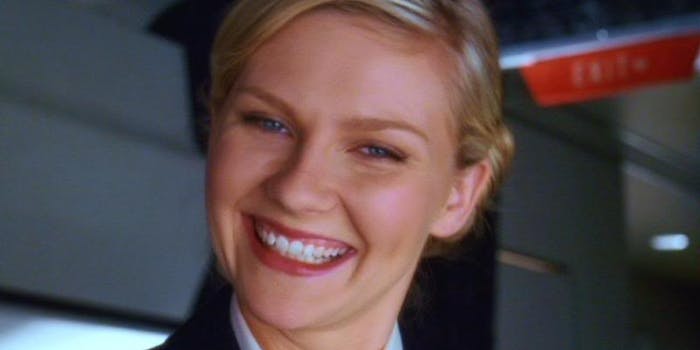 In defense of the ‘Manic Pixie Dream Girl’

While some are calling for the death of the MPDG, I’m not quite ready to kill her off just yet.

On Tuesday, film critic Nathan Rabin penned an apology over at Salon for coining the term “Manic Pixie Dream Girl” in his 2007 review of Cameron Crowe’s Elizabethtown. Describing Kirsten Dunst’s character in the film, he wrote in that review that the Manic Pixie Dream Girl “exists solely in the fevered imaginations of sensitive writer-directors to teach broodingly soulful young men to embrace life and its infinite mysteries and adventures.” After the review was published, the Internet slowly picked up on Rabin’s description of the gendered film trope until MPDGs suddenly seemed to appear in every other film.

Of course, when Rabin coined the term, he wasn’t commenting on a new trend in popular culture—female characters have served as foils for the growth of male protagonists in a plethora of different cultural narratives over the years. Still, by putting a name to the “Manic Pixie Dream Girl,” Rabin was describing a particular, contemporary iteration of the old patriarchal storytelling trope of woman as muse, supporter, and helpmate repackaged for a new generation. By doing so, Rabin was calling out the “fundamentally sexist” trope in storytelling that “makes women seem less like autonomous, independent entities than appealing props to help mopey, sad white men self-actualize.”

The MPDG, as exemplified by Dunst, Garden State’s Natalie Portman, and (500) Days of Summer’s Zooey Deschanel, is flighty and free-spirited, playful without being a ditz. The audience is supposed to understand that she is more than just nice to look at (though, she must be that); her shallow development as a character allows the male protagonist to easily map his own desires onto her—and those of us sitting in the audience get to map our desires onto her, too. Her power is that when we gaze upon her on screen she doesn’t gaze back at us too hard. She never makes the story about her.

Seven years after Rabin’s initial review of Elizabethtown, he now regrets inventing the widely employed Manic Pixie Dream Girl shorthand description. Rabin asserts in his apology that the trope has become clichéd and overused. He explains, “I coined the phrase to call out cultural sexism and to make it harder for male writers to posit reductive, condescending male fantasies of ideal women as realistic characters. But I looked on queasily as the phrase was increasingly accused of being sexist itself.”

Whereas the MPDG was supposed to describe vapid, unrealistic women characters in films, the more the term got used the easier it became to describe seemingly any female film character as an MPDG in order to misogynistically dismiss her. Rabin continues, “I understand how someone could … be offended by the assertion that … Diane Keaton’s Annie Hall or Katharine Hepburn in Bringing Up Baby … is nothing more than a representation of a sexist trope or some sad dude’s regressive fantasy.”

To be completely honest, I have probably participated in the very trend Rabin is worrying about in his essay. After Her came out, I couldn’t help but wonder in a review I wrote of the film if Samantha, the computer operating system in the film voiced by Scarlett Johansson, wasn’t “just the ultimate Manic Pixie Dream Girl.” Some readers of the review felt that I had too easily dismissed Samantha, ignoring her evolution and growth through the film by asserting she was just another in a long line of female narrative props ranging from Helena Bonham Carter in Fight Club to the real doll in Lars and the Real Girl.

I can see where my readers, and Rabin, are coming from. By lumping all the quirky, supporting female characters in contemporary films into the category of MPDGs, we crucially ignore their differences and lose important nuance in our criticisms of film. After all, Elizabethtown is arguably doing something pretty different than Her in regards to the way the two films use gender in the narrative.

Still, despite my sympathy for Rabin’s apology, I really wish he hadn’t written it. As a woman who is old enough to just barely still be considered a millennial, the term Manic Pixie Dream Girl has been intensely useful and important to me since I first encountered it. The ability to shorthand what seemed to be a pervasive and powerful cultural ideal of white femininity embodied by the on-screen MPDG has been invaluable as I came to feminist consciousness and began to more deeply analyze the representations of femininity marketed to my generation. But, more than that, the concept of the MPGD doesn’t just describe a gendered film trope—it helps me make sense of non-fictional gender relations as well.

I’d be hard-pressed to say I’ve ever met a real-life MPDG, of course. Flesh and blood women, no matter how they come off at first, are inevitably more complex and substantial than the superficial waifs of our collective pop culture fantasies. Still, for women of my generation, perhaps especially middle-class, heterosexual, white women, the Manic Pixie Dream Girl is one powerful version of our ideal selves and many of us have found ourselves emulating her, wanting to become her. As much as the MPDG is laughable in a lot of ways, we also desire real world versions of her in our culture. Women want to be her and men want to date her.

As Laurie Penny discusses in an article for The New Statesman entitled, “I Was A Manic Pixie Dream Girl,” it is easy for women in real life to “play” the MPDG, adopting her characteristics in an attempt to become “that girl.” In that sense, talking about the MPDG isn’t just a useful tool for analyzing gender in film—it is a way to describe the pressures on women to aspire to be an unthreatening, unaccomplished accessory to men as men enact their patriarchal right to run the world (still).

Talking about the idealization of the MPDG in both film and real life is a pretty powerful tool for feminists to have in our descriptions of gender relations. It’s one I don’t think we should apologize for using, even if it blurs some important details every time we use the term and even risks sometimes veering into misogyny.

So, while Rabin and others are calling for the death of the MPDG, I’m not quite ready to kill her off just yet. The logic that says we should stop talking about something if we want it to disappear, such as the idea that talking about race creates racism, strikes me as deeply flawed. The MPDG doesn’t really exist, of course, except for in our cultural imaginations.

But pretending she isn’t in our heads, that she’s lost all her power because she has become a Frankenstein-ish caricature and a cliché, doesn’t mean the MPDG no longer operates as a cultural ideal that shapes the way men and women act and interact—both onscreen and off.

Dr. Lisa C. Knisely is a freelance writer who writes about feminism, pop culture, food, and ethics. She is the Editor-in-Chief of Render: Feminist Food and Culture Quarterly.