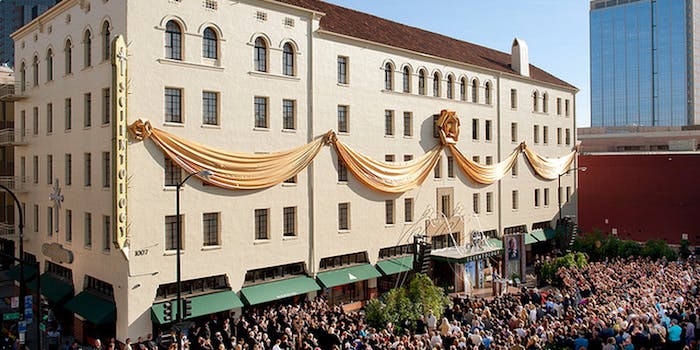 Who will be Scientology’s next great celebrity figurehead?

One theme hammered in Lawrence Wright’s book Going Clear: Scientology, Hollywood, and the Prison of Belief—and a new HBO documentary based on it—is the role of celebrity in the widely criticized religion. In the 1970s and 1980s, John Travolta enjoyed an ascent to fame parallel to his rising status in the church. In later years Tom Cruise became known as the face of Scientology, giving voice to some of its more unpopular ideas in major interviews.

But the famously litigious (and controversially tax-exempt) church couldn’t keep its favorite stars golden forever: Both are now under fire for their complicity in the alleged abuses at the core of the organization and have become the subject of especially sordid tabloid rumors; neither says much if anything on the record these days about their religious beliefs. Meanwhile, recruitment is weak: Active church membership has dwindled to just 50,000.

That state of affairs would seem to suggest a celebrity spokesman vacuum at Scientology’s most elite level, and an opportunity for some enterprising actor or musician to seize the reins of power. After a recent screening of HBO’s Going Clear, which will air on Sunday, I asked filmmaker Alex Gibney who might step into Cruise’s figurehead role. “There’s nobody on the horizon,” he said—or no one who could rival Cruise’s renown and influence, at least.

Maybe so. But there’s no shortage of celebrity Scientologists, and it’s only a matter of time before one steps up to the plate. Join us as we speculate wildly about the candidates.

Masterson is perhaps best known for portraying the functionally parentless Hyde on That ’70s Show, though he also appeared in the Travolta movie Face/Off, so he’s probably comfortable with Scientologist royalty. He was also raised within the religion. And he had among the strongest words for Gibney ahead of Going Clear’s release, in an interview with Paper:

I heard about that documentary; the documentary where they interviewed eight people who hate Scientology. Should be pretty interesting. I wonder if Sundance would allow a documentary of, like, eight people who hate Judaism. But you know, my religion’s fair game, I guess, ’cause it’s new. I only heard about [the book] recently. I do read, I do go out, but no one had mentioned it to me. When I looked into it, I noticed that he couldn’t publish that book in Canada or the UK because the libel laws are so much stricter than ours. And so when I asked about it, they’re like, “Oh yeah, there’s basically like 200 lies in the book and so in England and in Canada he couldn’t even publish that book.” Anyone can say anything about anything. How true it is, I guess that’s up to the reader. If you’re going to write something and you don’t ask the people who actually do it, then what’s the fucking point? We could all interview the KKK about what’s cool about being white, but we don’t. I don’t know; it just seems retarded to me.

Bonus points: He describes L. Ron Hubbard as “a fucking guy who wrote awesome shit that I love studying.”

Fun bit of trivia: Masteron’s That ’70s Show co-star (and current Orange Is the New Black star) Laura Prepon is a Scientologist too! Last year she countered rumors that we saw less of her lesbian OITNB character in the Netflix show’s second season because of enduring friction between her church and LGBT groups. “I’ve been a Scientologist since 1999 and I’ve never come across any piece of info that’s negative or derogatory towards the LGBT community,” she told Fusion, having never read this passage from Hubbard’s Dianetics:

The sexual pervert (and by this term Dianetics, to be brief, includes any and all forms of deviation in Dynamic II [i.e. sexuality] such as homosexuality, lesbianism, sexual sadism, etc., and all down the catalog of Ellis and Krafft-Ebing) is actually quite ill physically… he is very far from culpable for his condition, but he is also far from normal and extremely dangerous to society.

A healthy sense of denial is essential for the A-list Scientologist. Nice work!

A great choice if Scientology wants to shed its image as a collection of uptight paranoiacs, Beck is probably the only celebrity in the church who keeps his chill when asked about it (though he used to deflect the topic at every turn). He manages to make the religion sound like an utterly casual self-improvement club in this passage from a 2012 Vulture interview:

He says his father was involved in Scientology since before he was born and “has had lots of benefits from it,” that “it’s just something that I’ve been around.” “Some people,” he says, “do yoga, some people get into meditation, a whole half of my family are all Presbyterian and they’re very churchgoing, and my grandfather on my mother’s side was smoking hash and drinking beer every night. “Everybody,” he continues, “is trying to figure out a way to deal with their issues and things that are unresolved. I mean, some things just don’t resolve. But whatever’s going to get you through. That’s my feeling about it.” So Scientology is a part of his life? “Yeah,” he says, “people in my family do it. I’ve read books, and I’ve learned about it. I mean, what I’m doing — I have a job, raising kids, I have friends, I have my interests, so I think my life is pretty full. I’m not off doing some weirdo stuff.”

Wait, Scientology’s not for weirdos? This changes everything! Unfortunately, it also precludes the church from adopting this Beck song as its anthem, which would have ruled:

If we want to go in the opposite direction, there’s actress Juliette Lewis. Sure, her star may have peaked with gritty 1990s films like Natural Born Killers, Cape Fear, From Dusk Till Dawn, and What’s Eating Gilbert Grape?, but she has a natural flair for Hubbardian turns of thought. She recently even argued that Tom Cruise’s disastrous watershed 2005 interview with Matt Lauer—which Cruise himself now cringes about—lay at the center of a chilling conspiracy:

I’ll get all conspiratorial on you. I’m just going to throw this out: The mainstream media is funded by pharmaceutical companies. When you have the biggest movie star in the world at the time—Tom Cruise—coming out against anti-depressants and Ritalin and just saying, ‘Hey, why don’t you put a warning label on there?’ … So, when Tom came out about that, I’ve never seen someone get torn down so hard, and they still brutalize him with Scientology pieces to this day … The thing about Scientology is it is anti-drug in that you’re seeking relationship or communication tools—simple basics on how to live better. It’s a religious philosophy and self-help movement. And you’ll never see a truthful word written about it in mainstream media.

Sorry for all the lies in this article, Juliette.

Um, could anything be cooler than belonging to the same religion as the Human Beatbox?

The familiar-faced actor appears in films that cover the entire Hollywood spectrum, from Selma to Ted, and was more than willing to misrepresent Scientology in an episode of Marc Maron’s WTF podcast. Is he a dilettante? Just uninformed? Or is he protecting Hubbard’s “technology” from the naysayers and cynics who would seek to tear it down?

Maron: What you’re saying is that there are practical tools but then there is the mythology of aliens, right?

Ribisi: Well, that’s not an alien. The concept of a thetan comes from this notion of what’s called theta, right? And the idea of a thetan is essentially the person. It’s the Scientology term for a spirit.

Oh, Giovanni. If you had bothered to audit your way up the Bridge to the level of Operating Thetan III, you’d know that thetans are souls, but specifically the souls of aliens tortured and killed 75 million years ago by a being named Xenu who used Earth as a prison planet. But you get a pass for baldly stating that Scientology isn’t an anti-psychiatry ideology after attending the gala opening of the church’s Psychiatry: An Industry of Death museum.

Not kidding: Ol’ Charlie dabbled in Scientology as long ago as the 1950s—around the time it was getting off the ground—after a cellmate turned him onto it. During a brief period of freedom, he reportedly “got super-energetic and flipped out when he’d been audited and would, for a time, talk about nothing but Scientology to the extent that people avoided his company.” In a staff evaluation upon his 1961 re-entry into the penal system, he listed himself as a Scientologist, then folded Hubbard’s philosophy into his own deranged worldview.

In 1969, the church bizarrely offered a $30,000 reward to anyone who might disprove the “vicious and well-organized rumor campaign” that insisted on Manson’s affinity for the movement. Nearly half a century later, it’s time to bury the hatchet: Manson’s wedding is off, and he’s got nothing but time as he serves out the rest of his life sentence—why not make him the church megaphone? Dude’s a lot scarier than all those lawyers ever could be.