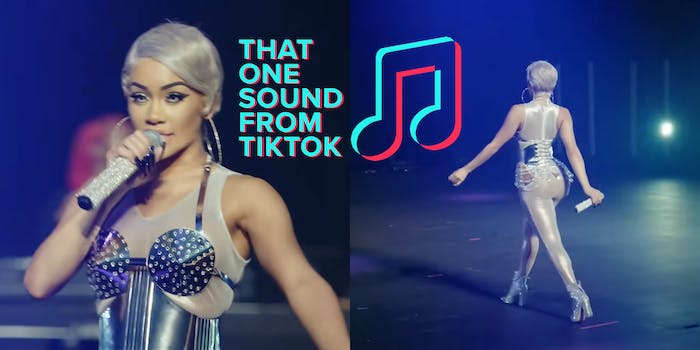 This week, we look into one of those rare TikTok sounds that has both an audio and visual component. And an interactive one, at that. Rapper Saweetie has been getting her steps in.

The audio going around TikTok starts with a simple tapping beat, then Saweetie says, “Let’s go.” An image of Saweetie turning and walking away accompanies many of the videos, and TikTok has been inserting that part into different scenarios, using a green screen effect.

One of the most popular videos using the sound is captioned, “7-year-old me going to tell my mom I threw up at 2am.”

Some of the edits are pretty ambitious.

But the audio can also be used to address work or life situations.

It’s from a live performance of Saweetie’s single with Doja Cat, “Best Friend,” and the full clip gives the meme some context. The camera zooms out after “Let’s go,” and Saweetie walks in front of a neon Bud Light Seltzer sign; the performance is from a virtual New Year’s Eve 2021 Bud Light Seltzer Sessions event.

But it’s continued to be popular on Twitter. Over the weekend, Saweetie responded to it being used in a meme about Netflix’s Squid Game, stating: “oh hell nah!!! I would never play in squid games.”

Saweetie previously went TikTok-viral over the summer when her McDonald’s meal debuted, and her song “Tap In” inspired a dance challenge last year. She’s hosting Netflix’s upcoming sex-positive special Sex: Unzipped, which will include comedians, experts, and puppets.