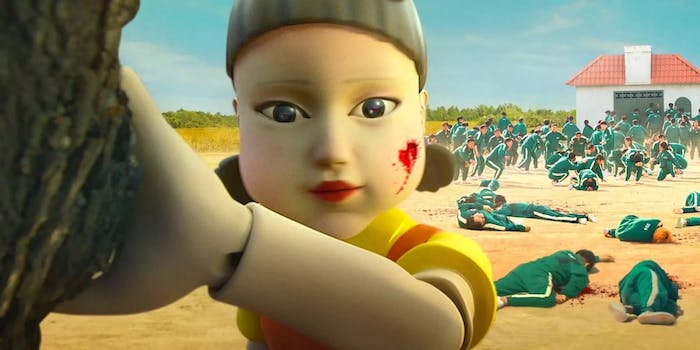 All the best ‘Squid Game’ memes on the internet

From the dancing doll to the 'sad old man' reaction memes, we've got you covered.

As the hit Netflix show Squid Game hurtles toward cultural ubiquity, it’s naturally inspiring a ton of memes. And thanks to the show’s wealth of bizarre imagery and wild reaction shots, there’s plenty of material to work with. First up: The “red light, green light” doll.

This creepy giant doll is one of Squid Game‘s breakout images, looming over the contestants in episode 1. If she sees you moving, you’ll die. Her deadly gaze is a perfect side-eye reaction image, and it’s already spreading fast on Twitter:

2) If Squid Game was in your country

Then we’ve got people imagining how Squid Game would go down in their location—including the dubious likelihood of accepting a weird challenge from some guy who accosts you in a train station. Lots of people are also sharing local variations on the traditional Korean children’s games featured on the show.

Elderly contestant Oh Il-nam—star of one of Squid Game‘s most heartbreaking storylines—has also inspired his own unlikely meme format, based on a scene where he sits alone before one of the challenges. He’s a perfect avatar for mournful loneliness:

Over on the video side of things, people are obsessed with a fanmade video of the doll statue doing a creepy dance. In the show, she’s completely stationary aside from her eyes and head, but TikToker @punyaibenk created an incredibly lifelike animated remix. It’s been viewed 68 million times in the past nine days, spawning a ton of musical remixes where she dances to different pop songs.

The downside to all this Squid Game mania is that if you haven’t seen the show yet, then you’re currently surrounded by an overload of incomprehensible pop culture references. But never fear: there’s even Squid Game memes for people who don’t know what happens in the show. It’s a TV drama about squid… right?

At this rate, social media will be at least 90% Squid Game content by the end of the month. Good luck to everyone trying to navigate a Squid Game-free internet.