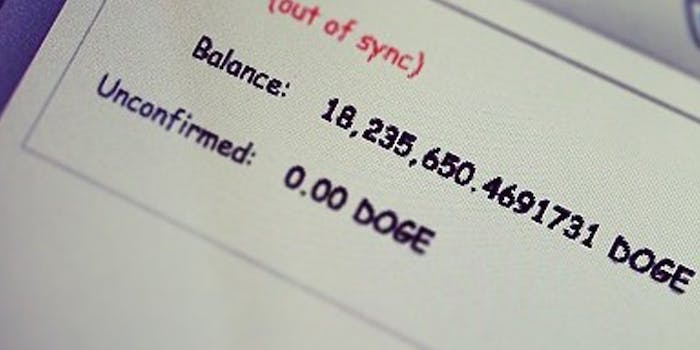 Did you get blessed by the @dogetipbot, too?

An anonymous guardian angel is sitting atop an extremely large pile of dogecoins, and has started giving them away via Twitter’s @dogetipbot. His first spree was launched in mid-March, when he sent 14 million dogecoins to the doge4water cause, and has picked up the pace since. The user @savethemhood is spewing millions of dogecoins to celebrities and tech influencers. The only request? That the good deed be passed along to people in need. “No press, no interviews,” the user tweets. His intentions are simple:

The top wealthiest 1% possess 40% of the United States wealth.

And he’s concluded that he’s going to help fix it with dogecoins:

I’ve been watching the dogecoin community. They have pure intentions. I will extend a hand out to help.

So far, @savethemhood given large sums of dogecoins out to these persons and entities. I translated the amounts to reflect US dollars based on dogecoin’s price at time of writing:

But the giving continues beyond these 46.5 million dogecoins (over $18,000). Relying on celebs and tech personalities to figure out what the altcoins are and how to use them isn’t @savethemhood’s only platform. Posting Instagrams and tweeting as he goes, @savethemhood has put up fliers around the streets of San Francisco with tear-off paper wallets attached.