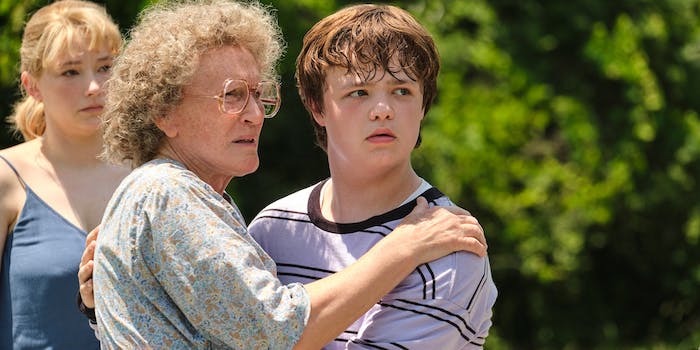 Ron Howard’s Hillbilly Elegy tries its damnedest to be apolitical, which is pretty comical given the circumstances. Based on the bestselling memoir by Republican venture capitalist J.D. Vance, it is (in theory) a combination of social commentary and a schmaltzy rags-to-riches story about the American Dream. Vance grew up poor, the son of a single mother who fled her Kentucky home to build a new life in Ohio. Struggling with addiction, she wasn’t able to give her children a stable upbringing. But with the support of his tough Appalachian grandmother, J.D. Vance did well in school, joined the Marines, and went on to study law at Yale.

RELEASE DATE: Nov. 24, 2020
DIRECTOR: Ron Howard
STREAMING: Netflix
Adapted from the memoir by J.D. Vance, this family drama depicts the life of a white working-class family in rural Kentucky and Ohio. Ignoring the conservative political context of the book, it’s a clumsy and simplified interpretation of the American Dream.

Vance’s memoir made him a Trump-era conservative celebrity, both praised and criticized for his dubiously-authentic depiction of white working class life in rural Kentucky. It feels absurd that the movie tries to avoid “politics,” when the whole concept and impact of the source material was deeply political. Vance’s childhood was shaped by conservative policies designed to punish poor and vulnerable people. His family suffered because the U.S. lacks an adequate social safety net for people living in poverty and relies on an exclusionary commercial healthcare system. Meanwhile, Vance’s success was buoyed up by right-wing punditry, including white nationalists. He got rich working for a venture capital firm owned by Trump donor Peter Thiel, and his wife clerked for Supreme Court Justice John Roberts and (back when he was still a regular judge) Brett Kavanaugh. Directed by Ron Howard (A Beautiful Mind) and written by Vanessa Taylor (Divergent), the movie erases all of this political context.

Plenty of people will love or hate this movie based purely on their political leanings, but honestly it’s just mediocre. It doesn’t have anything interesting to offer in terms of direction, performance, or artistic vision. Ron Howard is an experienced and competent filmmaker, so nothing here is especially catastrophic. But he’s clearly being very cautious, balancing moments of histrionic drama within a familiar story arc. Despite being based on real people, most of the main cast feel like stock characters.

With its corny voiceover and bad wigs, Hillbilly Elegy feels like a distinctly second-tier movie that accidentally landed Amy Adams and Glenn Close in lead roles. Adams is fine, which is several grades below her usual standard. Meanwhile, Close just comes across as ridiculous. Playing Vance’s mother and grandmother, respectively, both roles are drawn from real life, including their appearances. Yet in the context of the movie, their scraggly wigs and cheap clothes feel like an SNL parody of Hollywood stars getting an ugly makeover to win an Oscar. On the poster, they wear an oversized stars-and-stripes T-shirt (Close) and a set of denim overalls (Adams), a choice that was derided online for resembling a shallow hillbilly stereotype.

From the styling to the clumsy script, nothing here seems authentic or heartfelt compared to a film like The Florida Project, which offered a truly sensitive depiction of American poverty. Glenn Close is particularly embarrassing, because while Vance’s grandmother was clearly a larger-than-life figure, her movie depiction is laughably broad.

The main narrative switches between two timelines: the adult J.D. Vance (Gabriel Basso) traveling from Yale to visit his ailing mother in Ohio, intercut with flashbacks to Vance’s childhood (starring Owen Asztalos). We see how cycles of abuse and addiction shaped his upbringing, and how Vance struggles with the snobbish, privileged world of Ivy League law. His girlfriend Usha (Freida Pinto) is a supportive but largely personality-free presence, which fits in with Basso’s rather generic performance. He could easily be swapped in for the white male protagonist of any B-level family drama, while Asztalos is more distinct as the teenage Vance.

The whole point of Hillbilly Elegy was how it shone a light on an underrepresented demographic. But while there are relatively few books and movies about Appalachia compared to New York City or L.A., this film still feels deeply unoriginal. Hitting a series of hackneyed story beats about addiction and parental conflict, it simplifies Vance’s life into a triumphant example of the American dream. With tough-love support from his grandma, he pulls himself up by his bootstraps and gets rich. So instead of thoughtfully exploring an overlooked corner of American life, it’s a totally standard Hollywood fantasy. American pop culture loves to tell stories about people suffering through poverty, addiction and abuse. These only become controversial topics when the storyteller adds context, which this film obviously doesn’t. Ron Howard depicts Vance’s life in a political vacuum, which is a political act in itself.

Hillbilly Elegy comes out on Netflix on Nov. 24.