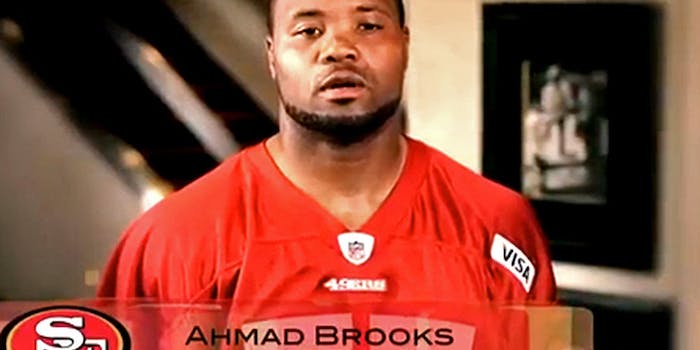 Two 49ers players are now denying they ever took part in the anti-bullying It Gets Better series—despite some pretty clear video evidence to the contrary.

It’s getting progressively worse for the San Francisco 49ers.

On Wednesday, cornerback Chris Culliver became embroiled in controversy thanks to anti-gay comments. During an interview with Artie Lange, the radio show host asked if there were any gay players on the team.

“Nah,” answered Culliver. “We ain’t got no gay people on the team. They gotta get up outta here if they do. Can’t be with that sweet stuff. Nah, can’t be in the locker room.” He apologized a day later claiming his comments did not mirror the feelings “in my heart.”

But that was just the beginning.

Now two players who starred in the NFL team’s It Gets Better video–which is meant to support gay youth who are victims of bullying–now suddenly denied their participation altogether. 49ers’ linebacker Ahmad Brooks and nose tackle Isaac Sopoaga told USA Today that they didn’t remember taping it.

On Thursday, It Gets Better founder Dan Savage pulled the video. He lashed out against the players on Twitter.

Savage told Outsports that he took it down because he only wants to highlight supporters of the the campaign.

“We don’t want videos of people who didn’t realize what they were doing,” said Savage. “It’s a project specifically aimed at LGBT kids and their unique need for support and role models.”