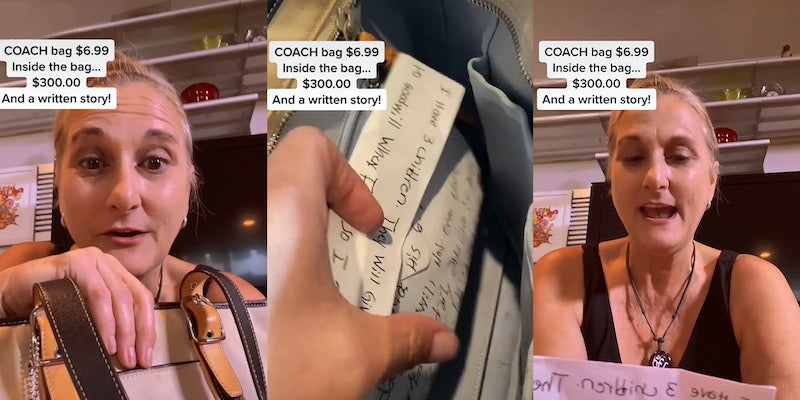 ‘In a world full of Karens, be a Martha’: TikToker purchased $7 Coach bag from Salvation Army—and found $300 of the former owner’s inheritance inside

'I am giving it away because my kids don’t want it. So go buy yourself a new bag.'

A TikToker picked up a neglected Coach bag from Salvation Army and left the store with someone else’s inheritance. The woman’s story and the wild note she found from the owner have become TikTok’s latest obsession. Her video has reached an astronomical 7.6 million views.

In the original video, user @marthainfused explains to the camera how the Salvation Army inheritance came to pass. She saw a Coach bag looking worse for wear at her local store. For $6.99, she thought it was a steal and a perfect project to fix up.

“I thought I could clean up, so I start working on trying to take this flap out, at the bottom of a purse, and there is an envelope,” she says.

The mystery envelope came with $300 cash and an explanation, a message from the previous owner.

“I have three children, they will give my things to Goodwill when I die. So I am putting their inheritance inside all my favorite things,” the message reads.

The note then went on to explain the even wilder origin story of the bag. The woman, who signed the note “Martha”, says the bag was “given” to her by her husband’s girlfriend. Actually, she explains, it was left behind when she came home early one day and the mistress made a run for it.

“I carried it daily, and I am giving it away because my kids don’t want it. So go buy yourself a new bag,” the note said.

While the TikToker said she picked the bag up at Goodwill in her initial video, she clarified in a follow-up that she actually purchased it at Salvation Army. She also noted that she went back to the store to ask the employees if they knew Martha, as she suspects that she may still be alive. One of the workers said she did know her and last saw her at the store in December 2021.

The TikToker also claims another person picked up an item from Goodwill featuring a note from Martha, and they plan to meet up.

She added that she just donated several items to Goodwill and included a $100 bill in a pair of pants to pass on Martha’s kindness.

“In a world full of Karens, be a Martha,” @marthainfused says.

Viewers were taken aback by the roller coaster story of the Salvation Army inheritance.

“This is like a mini hallmark movie,” one user wrote.

Some said they know others with a similar practice.

“My grandma did this with books! $100 bills in all her books. My parents said they’d do the same,” one viewer claimed.

Even Coach responded to the viral story.

“MARTHA IS AN ICON,” the brand wrote from their official account.

The Daily Dot reached out to @marthinfused via TikTok comment.