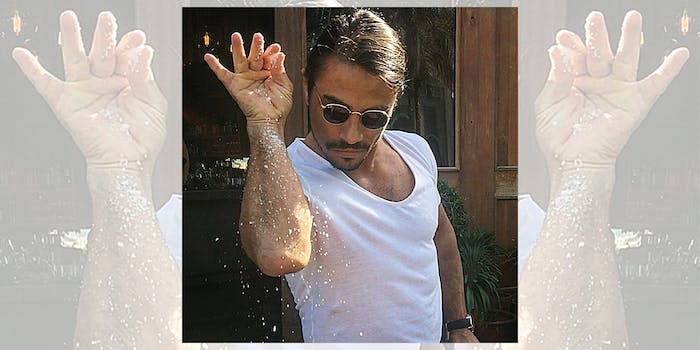 Turkish restaurateur Nusret Gökçe, aka “Salt Bae,” has a habit of getting himself into trouble. Back in December, there was a bit of a ruckus in Miami when an old Instagram post surfaced of him dressed as Fidel Castro.

Now it seems he’s not faring so well in New York City either. His recently opened Manhattan restaurant, Nusr-Et, received some harsh reviews ( The New York Post called it “a ripoff,” and the reviewer from Eater, while slightly kinder, was likewise unimpressed). It was also pointed out that Gökçe’s signature move—grabbing a handful of salt and letting it trickle down his arm and onto a steak—was also a health code violation. Article 81 of the NYC health code says, in part, “disposable food grade gloves, waxed paper or an equivalent barrier shall be provided and used to prepare or serve food to eliminate bare hand contact and prevent contamination” unless said food is “heated to at least the minimum temperature required.” Since the meat is already cooked, Salt Bae can’t salt it with this bare hands.

Not wanting any more trouble, Gökçe seems to have updated his move with a pair of gloves. At least he was able to get somewhat stylish looking black ones, although if any of that salt hits his forearm on the way down, it’s all for naught.

As many people pointed out, you can also see fellow food celeb Jonathan “foodgod” Cheban, smiling in the background, so it seems that the NYC health inspectors aren’t the only ones who approve of the change in attire.