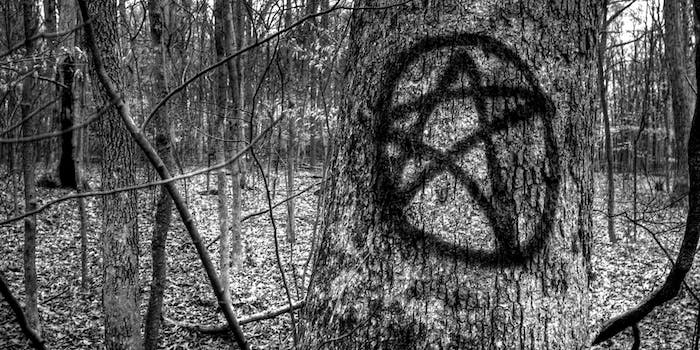 Being a warlock doesn't mean you're not a troll.

Christian Day, a warlock and owner of occult shops in Salem, Massachusetts, and New Orleans, is being accused by a fellow Salem occult shop owner, Lori Sforza, of online harassment. And the trial is in Salem! A witch trial! In Salem! Like history!

Back in 2011, the two were in the headlines for working together on a “magical intervention” for actor Charlie Sheen after the actor used the term “warlock” in a disparaging way. But after that, things apparently turned dark. Sforza, who uses the professional name Lori Bruno, says Day has been harassing her online and over the phone, calling her late at night and swearing at her and writing malicious things about her on social media.

Day appears to have courted drama in the witch community before. According to the podcast The Poison Apple, others have called him out for his social media behavior.

When asked for comment, Day, like any classic troll, maintained that anything he did say online was protected by free speech. “If free speech goes away, what happens to the journalists?” he asked a group of journalists, none of whom reminded him that the First Amendment only protects you from government persecution, not harassment lawsuits.

Boston Globe reporter Laura Crimaldi appears to have live-tweeted the trial, which resulted in a one-year harassment order barring Day from contacting Sforza. Day was apparently not too pleased.

Lawyer for witch says warlock has a history of harrassing women by phone. "This has been going on for years, your honor. It needs to stop"

Judge: "I am troubled by the frequent and consistent calls in the middle of the night."

Order is a civil one and it stays in effect for a year.

Warlock speaks: "On everything that is holy I did not make those calls."

Warlock Christian Day asks if he would be violating order by calling Sforza a liar. Storms out of court.

It’s unclear if the case will affect Day’s business selling his magical services, but if his press shot proves anything, it’s that he could always find a lucrative career in cape modeling.