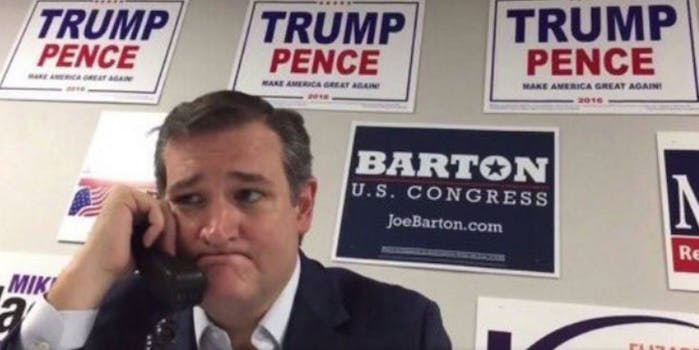 What a cruel twist of fate.

We all remember the look on Chris Christie’s face when he endorsed Trump for president back in March—a solemn, vacant plea that seemed to suggest that he might not see his children again if he didn’t read exactly what was on the teleprompter.

Now the campaign appears to have broken Ted Cruz of his will as well.

A still of Cruz working a phone bank Thursday for the Republican Party in Texas is swiftly making the rounds. It perfectly captures the cruel twists of fate of the 2016 election.

"I, Rafael Edward "Ted" Cruz, am being held here against my will. My captors have treated me well, providing regular bread and water…" pic.twitter.com/La4xRbSPUV

"Yes, that same Ted Cruz. Yup, he called my wife ugly. Yes, he did say my dad killed Kennedy. Why am I doing this? Because I hate myself." pic.twitter.com/zqEH61TlpK

The leads are weak…. What about the new leads, huh? The new leads, the Glengarry leads… My daughter… pic.twitter.com/r4ehXtD5Qr

For a millisecond I actually feel sorry for Ted Cruz https://t.co/eY0fCsVh0O

As you’ll recall, Cruz was one of Trump’s harshest critics. He held out on endorsing him for months, even on the stage of the Republican National Convention, and Trump has suggested that Cruz’s father was involved in the assassination of President John F. Kennedy and that he’d “spill the beans” on Cruz’s wife.

On the plus side, Trump appears to have finally stopped referring to him as “Lying Ted.” Now he’s #CruzCrewontheTrumpTrain.

Honestly, I don’t know which is worse.