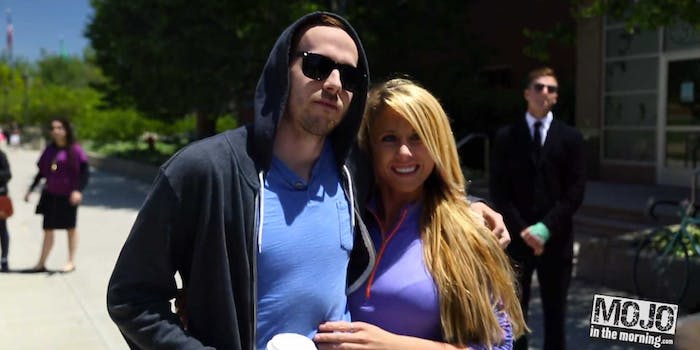 It was just a sexy accountant from Detroit.

Ryan Gosling’s been seen around Detroit while he’s filming How To Catch A Monster, so it’s not too much of a stretch to spot the actor in a local Starbucks or walking around the city with his bodyguard.

However, that hoodied, bespectacled man with scruff who you took a selfie with isn’t Gosling—although he does look a lot like him.

Detroit’s Mojo in the Morning found Doug, a tax accountant who’s often mistaken for Gosling, for one of their street scams. Wearing his normal clothes, Spike wagered that Doug looked “80 percent like Ryan Gosling.” Dressed in Gosling’s classic uniform of sunglasses, a hoodie, and a T-shirt, Doug could pass for Gosling’s doppelgänger.

With a coffee and fake security, assistants, and paparazzi in tow, they set Doug lose on Detroit.

They didn’t mention who Doug was supposed to be, but soon after he stepped outside people begin taking photos from afar and requesting photos with Doug.

The filter was off for many of these people who thought they had just met Gosling.

“I can just stand there and smell him,” one girl said as she posed for her picture while another admitted that Gosling’s sex scenes were the best part of his movies.

One person questioned what Gosling was doing in a Starbucks, but everyone else Mojo in the Morning filmed fell for it as he posed for more pictures and signed autographs.

“The result?” representatives for the show said on Wednesday. “Lots of screaming girls, autographs, and even the police having to stop traffic.”

Good news, men: With the right outfit, you only need to remotely look like Gosling to make both men and women swoon.