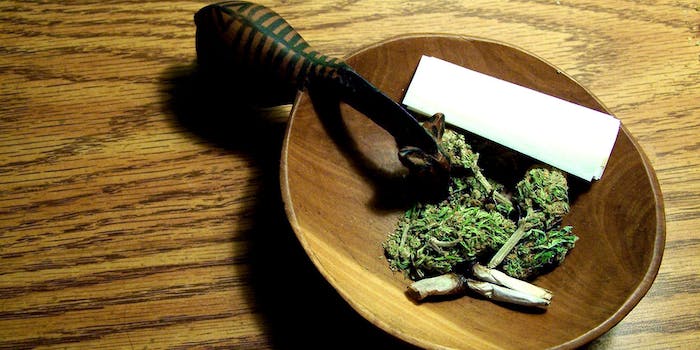 Now that bongs, joints, and vaporizers have disappeared from a Russian Wikipedia article about smoking pot, the government has declared it safe for the general public.

A Wikipedia article on smoking pot was apparently so dangerous to Russian civilians that the government threatened the encyclopedia with a blanket block last week. Editors immediately went to work cleaning up the article, and the government, satisfied with the self-censorship, declared it safe for public consumption once again.

What was so offensive in the first place? Bongs.

Well, not just bongs. You can compare versions of the article before and after it was declared safe, and the most obvious difference is that every single description of an inhalation devices has disappeared. So you if want to educate yourself about various pot delivery methods—joints or pipes or bongs or a vaporizer—you will have to look elsewhere.

A section on the “Specifics of Smoking Cannabis” also disappeared between revisions. It read, in part:

Smoking marijuana is punishable in most countries, so smokers tend to hide their addiction. For this reason, smokers often have no regular smoking device (because cannabis resin is rather odorous) and construct them out of scrap materials (pipettes, plastic bottles, foil). Translation via Google Translate

That was good enough for the government’s “experts,” according to a spokesman for Roskomnadzor, the regulatory group that runs the blacklist. “We received the new wording of the article on cannabis and sent it to the experts, who have decided that it now meets our requirements,” the spokesman told RIA Novosti.

Under Russia’s blacklist law, the government has the authority to block entire domains if they do not remove content it deems harmful to children or that promotes drugs or suicides. The Russian Wikipedia blacked out to protest the legislation last June, but that endeavor proved futile when the bill passed in November. Since then, the government has the bill’s broad powers to block a parody site, threaten to ban Facebook over a single user page about suicide, and compel Twitter into into banning users who post about suicide or drugs.

Wikipedia still isn’t entirely safe. According to Roskomnadzor, it still hosts 11 other articles that run afoul of the blacklist law. It hasn’t revealed which articles specifically, but we’re going to take a wild guess and say this one on bongs probably qualifies.

H/T Wikipediocracy | Photo by it was 3 a.m./Flickr