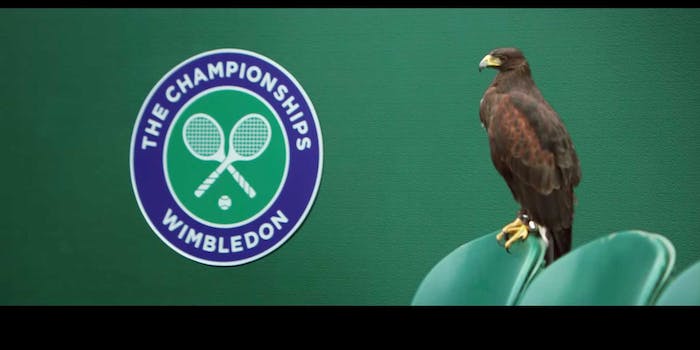 This is the real star of Wimbledon.

Meet Rufus. Rufus works in security at Wimbledon, the most prestigious tennis tournament in existence. However, the fact is, Rufus is a bird. A Harris Hawk to be exact, charged with removing the pigeons that plagued the South London courts till 2000.

The hawk, which is used non-lethally to remove the pigeons by simply frightening them away, has learned his skills from trainer, Imogen. The fabulous bird, which has its own Twitter account, has come into a newfound celebrity: Rufus is the star of a Stella Artois beer advertisement.

The spot coincided with an AMA (Ask Me Anything) that Rufus conducted on Reddit, where his trainer answered questions about the hawk.

I’m rather exceptional at my job. Some might say I’m *clears throat* enormously talon’ted (oh come on).

He also gets to meet celebrities.

@andy_murray with Rufus the hawk at @Wimbledon today j pic.twitter.com/0u95r9T1Z1

Basically Rufus has the best job in the world.