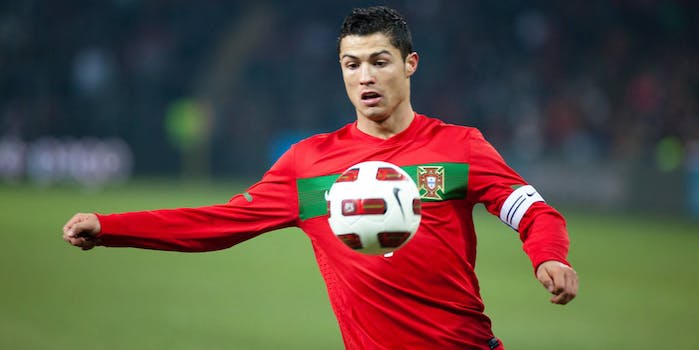 Cristiano Ronaldo, the dark horse in the meme game that is the Euro 2016 contest, is a pretty emotional dude. His frustrations are the stuff of supercut videos, his fears nothing more than a photoshop battle. Certainly, his stats could use a little help too.

The game of soccer isn’t Ronaldo’s focus, though. What he’s after is viral glory and he sure doesn’t need your meme-ification anymore. To paraphrase the great bard of our time, DJ Khaled, he just played himself.

Hungary and Portugal are set to face off on Wednesday in France. Understandably, a CMTV reporter wanted some face time with the most visible player on Team Portugal. Ronaldo was having none of his shit and threw the dude’s massive microphone into a lake as the team and its handlers walked past.

It’s worth noting that Ronaldo and the Portuguese news network have been feuding for years, with the soccer star not only boycotting CMTV but looking into legal action against them. To destroy a reporter’s gear is the ultimate mic drop. Let’s hope this savage behavior translates into Ronaldo doing something impressive on the field.

At press time, not so much: Portugal is barely cobbling together a 1-1 draw against the Hungarians.